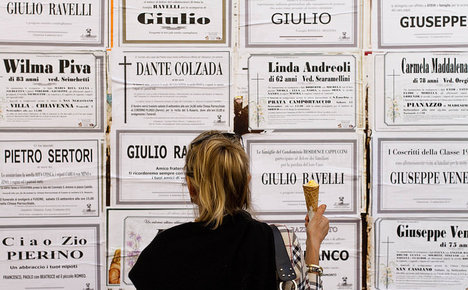 A pensioner in southern Italy faked his own death notice to see how the town would react. Photo: Daniel Wütschert/Flickr

Michele Raia, a retired tailor from Mugnano del Cardinale, was already a well-known prankster in the village but managed to deceive his peers by placing his own death notice on a wall in the centre of the village during the busy weekly market, Avellino Today reported.

Many in the town fell for his macabre prank and news of his death spread like wildfire among the villagers. Upon hearing the news, his friends ran to his family home to offer their condolences and help make funeral preparations.

But much to their surprise, none of Raia's family were at his home and nobody was picking up the phone. Confused, they looked again at the death notice – a common feature on walls across Italy – and realized something was amiss.

Raia's death notice didn't contain any of the usual information you would expect to find on a death notice. There was no mention of any service to be held nor cause of death. Neither was there any mention of place of birth and death.

There was just a solitary ambiguous phrase :“He offers his greetings to his friends and enemies.”

After looking at the notice again, Raia's friends began to wonder if the notice was genuine – and if it not, who on earth would play such a sick joke?

In the meantime, one of Raia's close friends found him alive and well, with the elderly joker admitting to putting the notice up himself, just to see how people would react to the news of his passing.

On hearing that Raia had 'risen' from the dead, many people in the town had another strong reaction: they ran to the nearest newsagents to play the lottery.