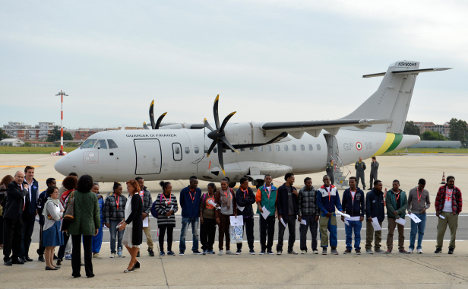 A group of Eritrean refugees prepare to board a plane to travel to Sweden as part of a new programme of the EU to relocate refugees. Photo: Andreas Solaro/AFP

“It is a defeat for those who claim it is better for the Mediterranean to become a lake of death… and believe that scaring the European people is the way forward,” he added.

The asylum seekers are being transferred to Sweden after it agreed on July 20th to take refugees from Italy and Greece in a bid to ease the humanitarian and financial burden on the two frontline states over two years.

They will fly to Luleå in northern Sweden, after which they will hand in their applications for asylum at a centre in Boden, according to a press release from Sweden's Migration Agency. The refugees – 14 men and five women – will then be offered a spot at a centre for refugees in the Östersund area in Sweden's Jämtland region.

Swedish Migration Minister Morgan Johansson welcomed that the scheme was being implemented for the first time on Friday at an EU summit in Luxembourg on Thursday.

“This is the first example of this issue of redistribution that we have fought for so much, to make sure that we are all prepared to accept our part of the responsibility,” he was quoted by the Swedish TT news agency as telling fellow ministers.

“Symbolically, it's very important. (…) It is important now that all countries live up to what we have actually promised each other. We break the ice and make sure that the implementation begins,” he said.

The EU formally agreed on the plan last month despite the opposition of some eastern European states worried about a popular backlash to migrants.

'More must be done'

Alfano said Italy was ready to relocate 100 more asylum-seekers who would go to Germany and the Netherlands, and the UNHCR said further relocations would take place from Italy at the beginning of next week.

“This is a significant day, a positive and important one,” the UN refugee agency's southern Europe spokeswoman, Carlotta Sami, told AFP.

“But we know more must be done. There is a great need for measures to be put in place to allow (asylum-seekers) to arrive in Europe safely,” she said, referring to perilous boat crossings in the Mediterranean which have cost over 3,000 people their lives this year alone.

The Eritreans had been rescued on the high seas over the past few weeks and taken to an experimental migrant screening centre or “hotspot” on Lampedusa island, where they were registered.

Avramopoulos and Asselborn were expected to travel to the Italian island later Friday to examine the centre, a prototype for several set to open at the end of November across Italy and Greece.

On Thursday, EU nations agreed to speed up the deportation of failed asylum seekers and crack down on so-called “economic migrants” – who are largely from poor African nations and not refugees from conflict zones.

A UN report in June detailed how the Horn of Africa nation, under Isaias Afwerki's iron-fisted regime for the past 22 years, has created a repressive system in which people are routinely arrested on a whim, detained, tortured, killed or disappeared.

The EU hopes the closed centres will sharply reducing the number of people who arrive by boat, refuse to be identified and head off across the borders to other bloc countries to seek a new life.

The centres and relocations are part of a multi-point plan which includes a military anti-people trafficker operation.

The UN's Security Council is set to vote Friday on a draft resolution to authorise military action against smugglers with Operation Sophia, which launched this week to seize traffickers' boats in international waters.

While the vote is not necessary for the EU to take action, the measure would legitimise plans under which European warships will board ships for inspection, confiscate them and even dispose of vessels used by migrant smugglers.