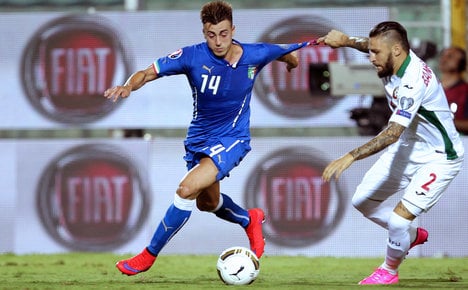 Italy forward forward Stephan El Shaarawy (L) has said Italy are fully focused on qualifying for the Euro 2016 championships ahead of their clash with Azerbaijan. Photo Marco Paternostro/AFP

Amid a number of Azzurri absences through injury, El Shaarawy is being tipped to start for Antonio Conte's Group H leaders following a string of encouraging performances at his French Ligue 1 side.

Azerbaijan, who sit 12 points adrift of Italy, have no chance of qualifying for next summer's championships in France but the group minnows can certainly throw a spanner into the works for Italy.

Azerbaijan lost their first four matches of the qualifying campaign but have been reborn since the appointment of Robert Prosinecki as coach.

They held Croatia to a scoreless draw in their last outing at home to take their tally to six points from their last four games.

A win for Italy in either of their last two qualifiers would seal their ticket for the championships.

Anything less than a win on Saturday could leave nerves frayed ahead of Italy's final qualifier, at home to Norway – who sit second at two points adrift – next Tuesday.

But Conte this week has stressed the need to wrap up qualification early and El Shaarawy said: “This is a really crucial game for us, we know a win will seal qualification for Europe and we've been working hard towards it.

“I think if we go out there completely focused on what we have to do and with the right belief we can bring the three points home.”

Italy suffered a blow earlier this week when Napoli forward Lorenzo Insigne, who hit a brace of goals in a 4-0 rout of AC Milan last week, was sent home with a swollen knee.

He was replaced by Milan midfielder Giacomo Bonaventura, prompting questions as to who Conte will deploy up front for the Azzurri.

When Insigne was still in the fray, he was expected to start on the left side of a 4-3-3 alongside Southampton striker Graziano Pelle and Antonio Candreva of Lazio.

But when it comes to his attack, Conte is not short on choice.

Last month Giovinco and New York City FC's Andrea Pirlo became the first ever Italian internationals to earn call-ups while playing in the MLS, although the 'Atomic Ant' – as Giovinco is known – had to return home early through injury.

This time the former Juventus striker hopes to make his trip to Europe count, and told Rai Sport: “I'm happy to be back wearing the Italy jersey and to have earned my place in the national set-up.