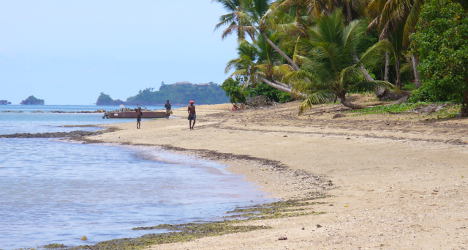 File photo of a beach on the island of Nosy Be, off Madagascar. Photo: Kalanosybe/Wikimedia

On the morning of October 3, 2013, French tourist Sebastien Judalet and Franco-Italian resident Roberto Gianfalla were attacked by a mob that was acting on false rumours of foreign involvement in the death of an eight-year-old local boy and a paedophilia connection.

The two men were beaten and burned on a beach on Nosy Be, an idyllic Indian Ocean island off the northwest of Madagascar. Hours later a third man – the boy's uncle – suffered the same fate.

Three days into the trial of 37 suspects, the prosecutor asked for a life of hard labour for 12 of the 14 people who are being prosecuted for kidnapping and murder – the maximum sentence in Madagascar, which has abolished the death penalty.

The defendants, including 35 civilians and two policemen, have been charged with a range of offences from murder and kidnapping to vandalism. All have pleaded not guilty.

Attorney general Jean de Dieudonne Andrianaivoson appealed to the court over the indictment of two policemen accused of failing to come to the victims' aid and the other 23 suspects on trial for kidnapping and murder.

Christian Raoelina, who is defending the police officers and is seeking his clients' acquittal, claimed they did all they could to save the victims.

“But the real culprits are the public prosecutor, the head of the district” and the mayor “who did not honour their responsibilities and instead put the blame on the police,” Raoelina said.

The trial continues on Friday, when the court may reach a sentence.

Sebastien Judalet has been cleared of all suspicions of paedophilia by French police, while there has been no evidence to date that any of the victims of the mob lynching either killed or abused the child.