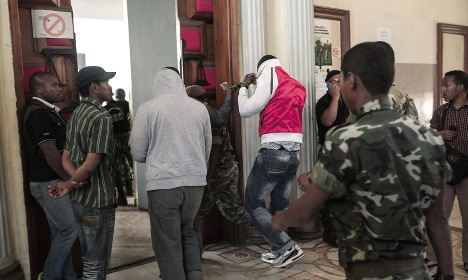 One of the accused hiding his face is rushed out by a marshall in Antananarivo, during the trial of 37 people accused of murder of two Europeans. Photo: Rijaso/AFP

A Madagascar court handed four men the maximum sentence Friday of hard labour for life over the mob lynching in 2013 of two Europeans and a local man, who were beaten and then burned on a beach.

The sentencing came as the court tried 37 people over the October 2013 murders, which were committed by a mob acting on false rumours of foreign involvement in the death of an eight-year old local boy and a paedophilia connection.

Among them, 25 suspects were given the benefit of the doubt and released, while another was formally acquitted.

One was sentenced to seven years of hard labour, while the rest were handed prison sentences ranging from three months to six years.

On the morning of October 3, 2013, French tourist Sebastien Judalet and Franco-Italian resident Roberto Gianfalla were attacked and brutally killed by a mob.

Hours later, the uncle of the eight-year-old boy whose death sparked the attack on Nosy Be — the idyllic Indian Ocean island off Madagascar — was also murdered.

Friday's sentencing came a day after Attorney general Jean de Dieudonne Andrianaivoson had asked for the maximum sentence for 12 of those on trial for murder and kidnapping.

He also asked the court for leniency for the other 25 suspects, including two policemen on trial for failing to assist people in danger.

One of the two officers was among those released Friday; the other has been sentenced to six months.

Most of the defendants had pleaded not guilty during the trial.

After a photograph of the brutal incident was shown in court, one of the four men sentenced to hard labour for life admitted he was “among those burning the vazahas,” using the Malagasy word for Westerners.

Fellow defendant Marcellin Tomboravo, who was sentenced to seven years of hard labour, admitted he transported one of the two murdered Europeans in his cart. His lawyer had appealed for his client's acquittal, arguing he had no choice but to obey the violent crowd.

Both the defence and prosecution teams had meanwhile said local officials should have also been probed.

Several videos of the tragedy were shown during the trial. One showed Judalet, 38, lying on the beach. A man strikes his head using a wooden stick, and with the last blow, his executioner says: “Goodbye, world.”

Gianfalla, a Franco-Italian who lived in Madagascar, was a 50-year-old cook.

Judalet, who worked as a bus driver and had been in Madagascar several times on holiday, has been cleared of all suspicions of paedophilia by French police.

There has been no evidence to date that any of the victims of the mob lynching either killed or abused the child.

The circumstances of the boy's killing have never been clarified, nor has anyone been tried for his death.

The issue of paedophilia is particularly sensitive in Madagascar where extreme poverty has led to a spike in child prostitution.

The UN in 2013 denounced what it described as the normalisation of child prostitution in Madagascar.