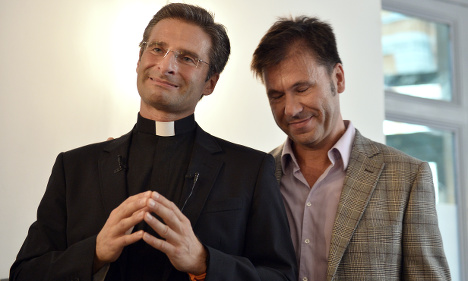 Krzysztof Charamsa told a private Italian television channel that he has “never met a gay lobby in the Vatican”, referring to rumours of a network of homosexual priests.

“I met homosexual priests, often isolated like me… but no gay lobby,” said Charamsa, adding that he also met gay priests who were “homophobes” and had “hatred for themselves and others”.

“But I also met several fantastic homosexuals who are some of the best ministers in the Church,” he said in an interview due to be broadcast Sunday.

Charamsa said he wrote a letter to Pope Francis asking him to convey his spirit of openness to bishops at the synod, where Church leaders discussed marriage and family teachings.

The pontiff has in the past spoken about homosexuality and the “gay lobby”.

In 2013 he famously said “Who am I to judge?” when asked about homosexuals in the Church, and the rumoured network of gay Vatican leaders.

Since 2005, the Church has forbidden the ordination of priests with homosexual tendencies. But this rule is applied in different ways, with many bishops turning a blind eye as long as priests remain celibate.

Charamsa, who was fired from his post at the Vatican, says he has stayed faithful to his vow of celibacy because he has “never touched a woman”.