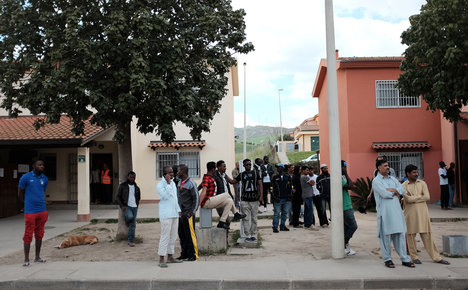 Refugees at the Mineo reception centre are helping elderly people out in order to stave off boredom. Photo: Alberto Pizzoli/AFP

Once a week, small groups are driven from the island's vast Mineo reception centre – a camp surrounded by nothing but orange fields and dust – to Catania, where religious community Sant'Egidio runs a community service scheme.

This week it's just Nigerian pastor Enok and Gambian truck driver Mamadou who are distracting residents at a retirement home in the city from hours of drivel on the television, which chatters on unobserved in the background.

“Elena, this is Enok, a Nigerian pastor who went to Libya to help there, but was forced to leave and ended up here,” Piero Giglio, a Sant'Egidio representative, says loudly to one elderly Italian lady.

Smiling, she takes Enock's hand, her frail body sunk into a big sofa, and tells the 35-year-old of her own travels, from Hong Kong to Singapore, and how Sicilians emigrated en masse to America after the Second World War.

Nearby, Fina, 95, asks anyone who will listen if they will bring her some clothes as she has nothing to wear – a request she makes weekly, and one that echoes many migrant pleas for donated garments.

On the other side of the room, silver-haired Giuseppe is amazed that 28-year-old Mamadou, with his rippling muscles, bright smile and spiky dreadlocks, is still single, reminding him “there are pretty girls in Sicily”.

“It's very good to meet people. We are all one, they don't make any difference. They old people treat us nice, they are happy to see us,” Mamadou told AFP.

Enok marvels too, saying the dozen or so residents “have only seen white, white, white (people) everyday. And now they see black, they embrace me. It's all about love.”

The Italians “show us love, solidarity, peace, they show us that we are human beings like them,” he said, adding that he “would have been a dead man” without the country's hospitality.

Giglio says the elderly Sicilians and young asylum seekers – dubbed “new Europeans” by Sant'Egidio – have more in common that immediately meets the eye.

The residents “say they are not happy they had to leave their homes, their things, to live in this place. They say time never passes,” he said. “It's a bit like life in Mineo,” where – unable to work or begin new lives – the migrants sleep up to 16 hours a day.

“They wait months, sometimes years without doing anything. (Volunteering) gives their life more meaning too.”

After the retirement home, Enok and Mamadou join up with two other asylum seekers who spent their afternoon volunteering with other elderly people too, to make sandwiches for homeless people near the city's train station.

In all, around 50 migrants do community service, with each of them getting to participate at least once a month.

After a quick prayer with Sant'Egidio members in a church with an altar dedicated to migrants, they spend the night in the community's lodgings, before taking the bus back to Mineo – and boredom – the following morning.