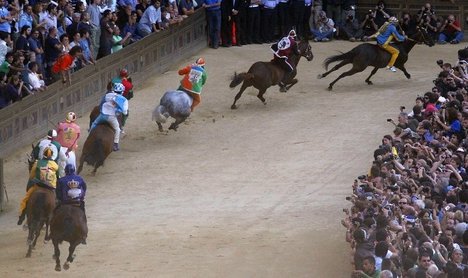 He was struck by the horse’s hooves in various parts of his body, and hit his head as he fell.

The horse rider was also among the four injured.

It is believed that the noise of the drums and the music caused the horse to bolt. After the incident the parade was immediately suspended and the horse sedated.

The news comes after a year in which horseracing has come under increased scrutiny in Italy.

In June, a horse died during the trials for the Palio di Siena, causing animal rights activists to call for the famous horse race to be banned.

Some 48 horses have died at the Palio di Siena between 1970 and 2007. The race takes place twice a year, and has fierce traditional roots in the city. But in recent years both the safety of the horses and the riders have been called into question.