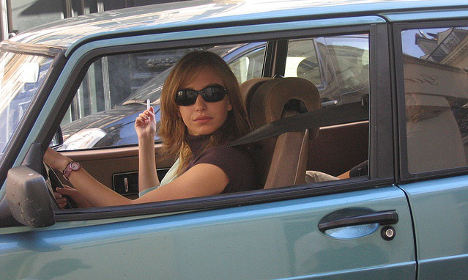 The law, introduced by Health Minister Beatrice Lorenzin, will take effect by the end of the year, La Stampa reported.

“I agree, we shouldn’t smoke around pregnant women or children. I’m a smoker but I try to be considerate about it,” Alessandro Roccoli, a 22-year-old student, told The Local.

The new legislation, which adopts EU guidelines on tobacco, also includes more shocking images being placed on cigarette packets to warn against the damaging effects of smoking, alongside the message “Smoking kills, stop immediately”.

A health warning will also be placed on electronic cigarette packaging, saying “This product contains nicotine, a highly-addictive substance. Use not recommended for non-smokers”.

The move comes ten years after Italy became the third country in Europe to ban smoking in indoor public places. Since then the number of smokers in the country has fallen from 23.8 percent to 19.5 percent, according to the most recent figures from Istat, the national statistics agency.

A report in April by the Smoke Free Partnership (SFP) concluded that 90 percent of people obey smoking laws in Italy, with only around three percent of inspections leading to fines.

But Roberto Brancato, a 47-year-old owner, told The Local that people might struggle to obey the new law, adding that he didn’t think there was a risk in passive smoking.

“Smokers seem to get all the blame, but we’ve already banned it in public places. I don’t think people will abide by this.”

Last year, Italy also banned smoking in outdoor spaces at schools while the minimum age to buy cigarettes was raised to 18.