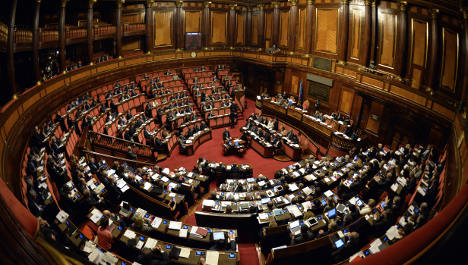 The Italian Senate will vote to relinquish most of its power in a revolutionary move to end decades of political instability. Photo: Andreas Solaro/AFP

Senators are expected to vote to cut their own number from 315 to 100 and effectively end their ability to bring down the government – a safeguard put in place after World War II to prevent the return of Fascism.

“It's a great victory for Matteo Renzi… it will show Italy and Europe that he is able to reform an irreformable country,” Roberto D'Alimonte, political science professor at Rome's Luiss University, told AFP.

“The reform will simplify the formation of governments, the passing of laws, reduce the power of lobbies and make parliament more accountable,” he said.

The youthful Renzi has made streamlining the country's governance by taming parliament's second chamber – which currently has the powers to delay and block legislation – one of the keystones of his mandate.

Under the current system, the two branches of government have equal weight. Transforming the Senate into a small chamber of regional lawmakers would stop bills getting bogged down in a back-and-forth between the chambers.

It would also bring an end to the political musical chairs that has produced 63 different administrations since 1946.

“It will be a change no government before him has been able to carry out,” said Sergio Fabbrini, director of the Luiss School of Government, noting that the first commission to reform the bicameral system was set up in 1983.

Italy is currently the only European country, apart from Romania, in which the government needs to get votes of confidence in both chambers.

The win would be a boost for Renzi, who is keen to refocus attention on Italy's economic prospects following a period of party infighting and a corruption scandal which forced Rome's mayor, a member of his Democratic Party, to resign.

The country, which pulled out of a three-year recession at the start of the year, has been enjoying a balmy period of recovery, with the unemployment rate falling in August to a two-year low of 11.9 per cent.

The International Monetary Fund (IMF) last week said Italy was experiencing “stronger than expected growth” and revised up its GDP estimates to a 0.8 percent expansion in 2015 and 1.3 percent in 2016.

The ambitious Renzi, 40, says his reforms are the reason – in particular a package to shake up the labour market that was welcomed by the business world but bitterly denounced by Italy's once powerful trade unions.

Next on the list for the former mayor of Florence is transforming Italy's snail-paced judicial system and schools.

As well as being a feather in his cap, the reforms are key to persuading the European Union to give Renzi the budgetary leeway he wants to be able to boost domestic demand through tax cuts and investment schemes.

Italy's draft 2016 budget will go before the EU on Thursday and a Senate success would strengthen its case.

Critics largely from the anti-establishment Five Star party and right wing have warned that the Senate reform will give ambitious Renzi authoritarian powers.

Former premier Silvio Berlusconi warned this weekend it was a “dangerous system, with only one man in power” – but D'Alimonte dismissed such concerns as “baloney”.

Franco Pavoncello, John Cabot University's political science expert, agrees: “The system had become absolutely unmanageable. This was a reform everyone wanted, but some tried to block simply to create problems for Renzi”.

The reform still has to go before the lower house and back to the Senate once more before being put to a general referendum expected in mid-2016.

Renzi has said he will resign if he does not get this reform, but experts say he has little to fear.

“Nothing in Italy is ever 100 percent sure, but the odds are decidedly in his favour,” D'Alimonte said.