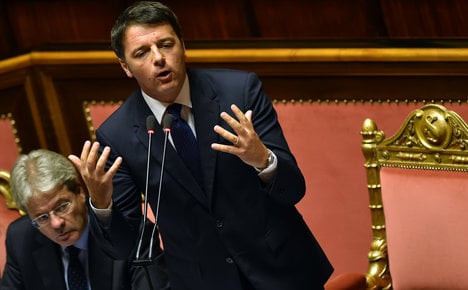 Prime Minister Matteo Renzi described the theme of his growth-orientated package as “Italy with a plus sign”.

Roughly half of this will be deficit-financed with Rome determined to make the maximum use of fiscal leeway it has identified within the eurozone's debt and deficit rules.

The balance will come from a combination of spending cuts – which at five billion euros are half the amount initially planned – and windfall gains from higher-than-expected growth and lower-than-expected debt servicing costs.

Instead of falling to 1.8 percent of gross domestic product (GDP), as forecast in the spring, or 1.4 percent as it would have done with a fiscally neutral budget, Italy is now projecting a deficit of 2.2 percent next year.

Despite the slippage, Renzi insisted that “our debt will fall next year for the first time since 2007”, and that Italy would respect the European Union's rules.

“We are not doing this because the EU asks us to, we are doing it because our children and grandchildren ask us to,” he said.

The budget's flagship reform was the abolition of a hated tax on primary residences – a politically popular step in a country where three out of four homes are owner occupied.

New spending initiatives include an anti-poverty programme (€600 million in 2016) and an investment plan for the impoverished south (€450 million).

By far the most costly measure, accounting for over half the total, is the freezing of Value Added Tax (VAT) and excise rates at their current levels rather than implementing rises, which should have kicked in under clauses in previous budgets intended to safeguard progress on deficit reduction.

Instead of rising to 25 percent, Italy's standard VAT rate will remain at 22 percent for 2016 and its main reduced rate, which applies to hotels, restaurants, drugs and passenger transport, is frozen at 10 percent instead of rising to 13 percent.

Renzi has been warning for months that any increase in consumer taxes could strangle the recovery at birth.

In a country where cash remains king, he argues that will lead to more big-ticket purchases.

Sceptics fear it will only benefit players in the country's huge black economy and weaken the fight against tax evasion, money laundering and fraud.

The government's own estimates suggest annual losses to tax evasion exceed €90 billion with almost half that down to VAT not being paid.

Another eye-catching measure is an experimental scheme to encourage people to switch to part-time working from the age of 63. The aim is to enable employers to rejuvenate their workforces and help combat a youth unemployment rate running above 40 percent.

The individuals concerned will have their lower wages partly offset by receiving part of their pensions a few years early, and a payroll tax break for employers will ensure their contributions are maintained at full-time
levels for the final years of their working lives.

After its approval by the cabinet, the budget law now goes to parliament for debate while simultaneously being scrutinized by Brussels for its compatibility with single currency rules.

In theory the European Commission could demand revisions but most economists think Renzi will get the bulk of the package approved.

Italy has already been allowed three years of leeway (2014-16) on its deficit cutting programme to offset the cost of implementing structural reforms which will lead to lower state spending in the medium term.

With this budget it is seeking an increase in the level of this allowance and an additional tranche to cover infrastructural investment.

Renzi insists Italy has earned the right to be trusted to forge its own path having made major strides to shake up its economy and streamline the way the country is governed.

The youthful premier's reform programme took a major step forward this week when the upper house Senate voted to abolish most of its legislation-styming powers.

But there are misgivings in Brussels about Renzi's focus on cutting property taxes, seen as an inefficient way of boosting economic activity.

The premier's aides respond that the tax cuts should be seen as part of a broader 2013-18 programme designed to ease Italians' total tax burden by some €50 billion – the bulk of which will involve reductions in corporate and payroll taxes.