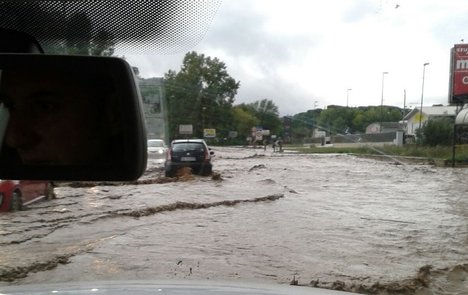 Two people were killed as central Italy was hammered by heavy rainfall on Wednesday. Photo: YouReporter.it
The worst of the weather fell on central provinces of Abruzzo and Lazio as well as the more southerly region of Campania, La Stampa reported.

A 40-year-old man was killed near Paliano in Lazio when his car was swallowed by a sinkhole which opened up due to the heavy rain. Two other people were travelling in the car at the time but both managed to haul themselves to safety.

In the neighbouring province of Abruzzo, A 51-year-old woman was killed in Civitella Roveto when a wall outside her home collapsed on top of her following a landslide.

As the heavy rain fell, rivers across both regions swelled and burst their banks. Some 100 people had to be evacuated in Canistro, near L'Aquila, when the Rio Spalto overflowed. In the nearby town of Tagliacozzo a 67-year-old man was found drowned in his flooded basement.

Four people were saved by police after becoming trapped on the roof of a barn in Tivoli, near Rome. The group was caught by surprise after the river Aniene burst its banks and the floodwaters quickly rose.

A video shows the floods in Tivoli. Video: YouReporter.it

In the region of Benevento, Campania, heavy rainfall caused the river Calore to overflow.

A seventy-year-old woman was killed when a resulting torrent of water swept through her home, while a seventy-year-old man died of a heart attack on Thursday morning while cleaning flood debris near his home.

In spite of weather warnings being put out for the Eternal City on Wednesday, Rome managed to avoid most of the bad weather – but surrounding towns and cities were less fortunate. The single railway line connecting Rome and Cassino was taken out of action by a landslide.

The bad weather is set to continue on Thursday, with further flood warnings being issued for the southern regions of Calabria, Sicily, Puglia and Basilicata.