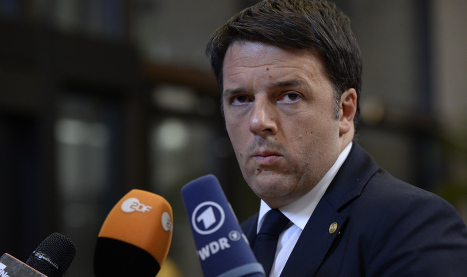 “We have to stop considering Europe the teacher with the red and blue pen,” he said, after asserting on Friday that Rome would resubmit the budget “as is”, should it be rejected by the European Commission.

Renzi said he did not think problems would be found with the tax-cutting budget because “we respect the rules, even those we think are wrong”, and in any case Europe “is not the wicked stepmother”.

The centre-left government on Thursday approved an expansionary budget designed to ensure a fledgling economic recovery takes wing in 2016 at the cost of slowing the reduction of the country's massive 2.2-trillion-euro debt.

Despite the slippage, Renzi insisted debt would fall and Italy would respect the European Union's rules.

But in a radio interview on Friday he warned the package would not be changed to please the Commission, the EU's executive arm.

“If Brussels gives the budget a fail grade, you re-submit it as is and the score is 1-1 and nothing changes,” he said.