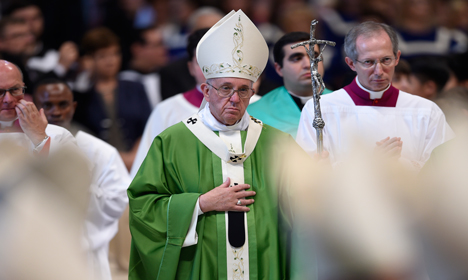 The pope on Sunday appeared to call for a more inclusive attitude. Photo: AFP

Bishops on Saturday submitted a report to the pope that fudges the key issue of whether divorced and remarried believers should be allowed to play a full role in the Church, reflecting a stalemate in the battle between the conservative and liberal wings.

Francis is free to ignore or implement the document, which leaves him room for manoeuvre should he wish to defy his conservative opponents and push on with his attempt to make the Church more relevant and more welcoming towards believers who find themselves in breach of its rules.

At a mass Sunday marking the end of the synod, the 78-year-old pontiff warned bishops of the dangers of “falling into a 'scheduled faith'”.

“We are able to walk with the people of God, but we already have our schedule for the journey, where everything is listed: we know where to go and how long it will take, everyone must respect our rhythm and every problem is a bother,” he said, looking pale and tired after the exertions of the synod.

Instead he pointed to the Gospel story of Jesus healing the blind man Bartimaeus as evidence that God “wants to include above all those kept on the fringes who are crying out to him”.

After the three-week synod — which Francis recognised in closing remarks had exposed deep divisions in the Catholic family — the pope must now decide if and when he updates guidelines on the Church's teaching.

The text approved on Saturday advocates a “case-by-case” approach to the most controversial question, the handling of divorced and remarried believers, saying they need to play a greater role in the Church but stopping short of explicitly ending the current ban on their receiving communion.

The document includes only one brief article on the Church's approach to gay believers, framing the question in terms of how priests can help support families who have “persons with homosexual tendencies” in their midst.

It reiterates that the Church believes every person, regardless of their sexuality, is worthy of respect but stresses the Church's opposition to gay marriage.

The emphasis contrasted sharply with first drafts last year which spoke of recognising the value of loving same-sex relationships, to the outrage of those opposed to any dilution of Church teaching that homosexuality amounts to a kind of disorder.