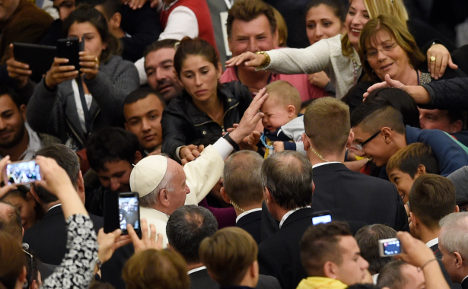 Pope Francis greets the crowd at the end of an audience to participants in 'Gypsy Pilgrimage' on Monday. Photo: Andreas Solaro/AFP

On Monday, Pope Francis spoke to an audience of 7,000 people from the Roma and Sinti communities, who gathered in the Paul VI Hall in the Vatican to hear his blessing, which marked the 50th anniversary of Pope Paul IV's meeting with Roma people in an informal settlement near Rome.

In the context of recent action to remove immigrant Roma from bidonvilles, or shanty towns, in France, as well as the 64 forced evictions in Rome and other parts of the EU, combined with the rise in right-wing, anti-gypsy statements by politicians, many members of Europe's largest and arguably most marginalized ethnic minority group were eager to see Pope Francis take a stand against ethnic bias.

He took this stand: “The time has come to uproot secular prejudice, preconceived ideas and the reciprocal diffidence that are often at the base of discrimination, racism and xenophobia,” he said. “No one must feel isolated…no one is entitled to trample on the dignity and the rights of others.”

Romani-Italian activist and musician, Santino Spinelli, who had the honour of performing for the Pope, was pleased with the event.

However, many Roma found offense in parts of his speech, noting that the general message was mixed with stereotyping and a view that blames Roma for their own poverty and alienation.

The pontiff implored the audience to be good Christians, “avoiding all that is not worthy of this name: lies, frauds, swindles, altercations.”

One does not win over an audience by calling the audience liars or thieves. For Roma, being seen collectively in such a light is all too familiar.

More striking to community organizers and to those who work for the integration of Roma into society was the commentary on education. Pope Francis admonished the Roma, saying “your children have the right to go to school, do not prevent them from doing so!”

With these words, he showed a lack of research and awareness of the barriers that Roma face. The EU and UN have criticized several European states for failing to end segregated schooling for Roma; in the countries with the largest Roma communities, even many supposedly “integrated” schools move Roma into separate classrooms. The Pope seemed to believe that the Roma community's low educational attainment is a choice.

Paris-based William Bila, a Rom who was raised Catholic and sits on the board of directors of the Roma Education Fund, was dismayed. “He is blaming the victim,” he said. “In the context of an invitation to the Vatican, did he tell these parents to stand up and fight for their rights as equal European citizens?”

Even on the question of media and public perceptions of Roma, his words at times seemed to blame the victims of prejudice. “Dear friends, do not give the media and public opinion reason to speak ill of you,” said the Pope. In effect, he argues that when the majority judges an entire ethnicity for the failures of its worst elements, it is only natural. As long as there are Romani children picking pockets somewhere in Europe, people and even the media are right to discuss all Roma as if they are thieves.

Since the 1960s, a Protestant, Pentacostal movement has spread rapidly in many Romani communities through aggressive outreach and the ordaining of Romani pastors.

Efforts including the recent 'Gypsy Pilgrimage', as the Vatican calls the event, may fit within a broader effort to reinvigorate the reach of the Catholic Church among the Roma community.

Yet the very name of the effort exposes a process of talking without listening – 'Gypsy Pilgrimage' employs a word that many Roma and Sinti find discriminatory; indeed the definitions of 'gypsy' include the ethnic group along with many statements of lifestyle or conduct. The event was organized by the Pontifical Council for the Pastoral Care of Migrants and Itinerant People; this alone reveals incorrect presumptions, as only a small fraction of the world's or Europe's Roma and Sinti are migrants or “itinerant” as a chosen lifestyle.

The Vatican's press information about the pilgrimage mentions some of “gypsies” who were grateful to attend, singling out a “Sinti member of the Slovak parliament”. There is no Sinti member of the Slovak Parliament but there is one Romani. The failure to understand that Sinti and Roma are not synonyms but names of two separate ethnic groups is not likely to offend many but is indicative of a general lack of rigour in the Vatican's approach to a population of 10-12 million – mostly law-abiding souls.

In all, says Bila, the speech put the blame for prejudice on the Roma themselves as much as it challenged discrimination against them. It was not, he worries, “a universal rejection of the racialized treatment of Romani peoples or of the anti-gypsyism that is at the root of all these problems”.

“There were certainly some positive intentions,” said Dr. Nando Sigona, an Italian researcher of Romani migration and community politics at the University of Birmingham in the UK.

“The speech reproduces a very narrow image of the Roma and Sinti – poor, illiterate and inclined to petty crime. It's even more surprising if one considers that many among the Roma and Sinti who attended the were highly educated, and hardly fitting the image the Pope was projecting with his words…ignoring how much varied, complex, stratified and diverse the Romani people are.”

Jud Nirenberg is a writer, former CEO of Europe’s largest umbrella group of Romani organizations, the European Roma and Travellers Forum and a guest lecturer at the U.S. State Department’s Foreign Service Institute on Roma issues.