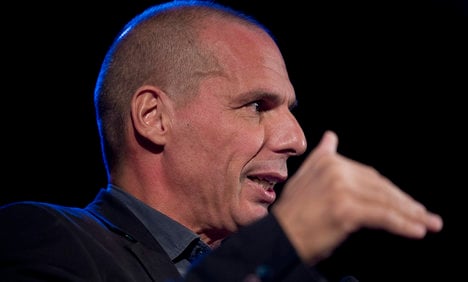 Varoufakis received the money to appear on the political chat show “Che Tempo Che Fa” on Italy's RAI3 on September 27th, and published the expenses on his own blog.

He said he received €24,000 for the interview after Italian tax and social security deductions, a figure which included first-class travel to Italy.

Rai's decision to sanction such a large payment to the motorbike fan has provoked outrage from politicians and licence fee payers.

What makes the huge payment especially galling is the fact that just three days earlier Varoufakis appeared on the BBC's political chat show, Question Time, for free, asking only that his travel expenses in economy class were reimbursed.

“It's scandalous – the man who almost brought Europe to the brink of financial crisis was paid €24,000 of taxpayers' money to appear on TV,” Gianfranco Librandi, a politician for Italy's liberal Civic Choice party told La Stampa.

But the broadcaster defended its decision, saying in a statement that the payment had been decided by the show's production company, Endemol. According to Rai, Endemol “has a defined budget for guests and obviously felt the compensation was necessary.”

Following the revelation, Varoufakis took to his blog – where he had published all his expenses received since resigning as finance minister in July – to defend his pricey appearance.

“I have been spending time and energy trying to spread the spirit of the 'Athens Spring' to the heart of Europe,” he wrote “which has meant endless travel to European cities over the last couple of months.”

Varoufakis went on to declare that the fuss was part of a conspiracy against him, and accused the 'troika-led media' of “investing effort in vilifying my latest endeavours.”