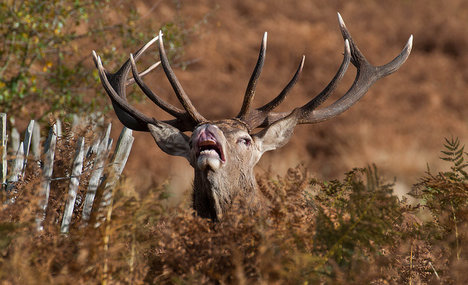 An Italian farmer has been killed after being attacked by a stag he hand reared from a foal. Photo Caroline Granycome/Flickr

Marco Coppini, 68, was feeding the chickens in a fenced-off paddock when he saw a fox skulking around the paddock. Without hesitation, he reached for his rifle, firing several times at the fleeing vulpine, Il Tirreno reported.

But the shots are said to have agitated Barabba, a four-year-old stag who lived in the adjacent paddock.

Barraba, who was reportedly in a hormonal phase and had recently grown an imposing set of antlers – leaped over the fence separating the two paddocks and repeatedly hurled himself into Coppini.

The 250kg animal gored and trampled the farmer to death inside the paddock.

While nobody witnessed the event, the dynamics of the attack were immediately clear to the police thanks to the animal's bloody antlers and hoof prints.

The alarm was raised by Coppini's brother-in-law, who found his lifeless body at around 1pm on Tuesday.

When police arrived at the scene and opened the paddock gate, the stag wandered out calmly and into a nearby olive grove.

The animal, usually so tame, did not need to be put to sleep so that police could take blood samples from its razor-sharp antlers.

The proud stag was actually forthcoming, licking the police officers' hands and faces as they took samples of Coppini's congealed blood from the antlers.

Barraba will now be taken to a nearby nature reserve, where he will live out the rest of his days.

“Deers are classified as dangerous animals and it is forbidden by law to keep them as pets,” Marco Aloisi, from the Maremma Wild Animal Recovery Centre, told Il Tirreno.

“He probably viewed Coppini as a love rival and charged at him – wild animals will always be a danger for man.”