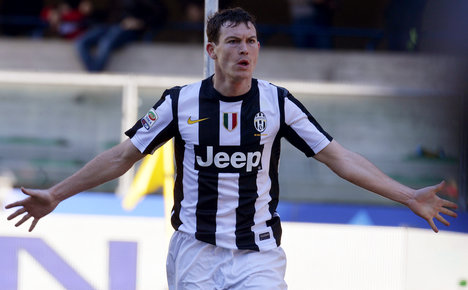 Swiss international Lichsteiner returned to the fray in spectacular fashion by scoring the goal that secured a potentially crucial point for Juventus in a 1-1 Champions League draw with Borussia Monchengladbach on Tuesday.

Juventus sit second in Group D, one point behind already-qualified Manchester City but five ahead of third-placed Spanish side Sevilla, with two fixtures remaining.

As important as that goal was for Juve's qualification chances, it meant even more than that to Lichsteiner.

The 31-year-old, who completed a banking apprenticeship while playing for Grasshopper in Switzerland's top flight in 2000-2001, believed his heart condition had ended his career.

Asked if he feared never playing football again, he said: “For sure. Prior to the operation I even feared the worst.

“It wasn't an easy time for me, a heart operation isn't something you take lightly. But thankfully friends, family and fans gave me a lot of support – and not just Juventus fans. “That's the great thing about football.”

Lichsteiner was sidelined by Juventus when he suffered breathing problems in a league game against Frosinone in September, after which tests revealed he was suffering from an atrial flutter which required an operation.

He was ruled out for just over a month and prior to Tuesday's game had only two training sessions in his legs.

“(Coach) Massimiliano Allegri asked me a couple of times how I felt. I said I felt good,” added Lichsteiner.

“I felt good in myself, I had been followed by the very best doctors and all the tests suggested that everything was okay.”

Despite his comparative lack of match fitness, Lichsteiner went on to produce a solid performance that was capped by a wonderfully-struck volley from Paul Pogba's delivery in the 44th minute.

Juventus, who saw Brazilian midfielder Hernanes sent off eight minutes after the restart for a studs-up challenge, held on for a share of the spoils that boosted their last 16 hopes.

If nothing else, Lichsteiner's struggles should serve as a lesson for Juve.

From the highs of reaching last season's Champions League final, the Italian champions and cup-holders have struggled on the domestic front so far this campaign.

Ahead of this weekend's trip to Empoli, they sit in 10th place nine points adrift of leaders Fiorentina.

Lichsteiner added: “Since the start of the season we've been struggling. It's crucial we all roll up our sleeves and get on with it, even if that means we have to put our game to the side and win ugly.”