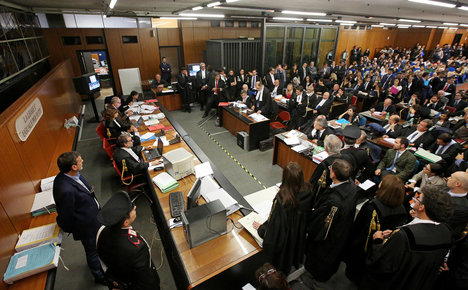 The group of would-be plaintiffs includes 37 Roma people, three refugees from Darfour and a political refugee from Pakistan, all of whom wish to argue that the defendants siphoned off funds that should have gone to a camp in the city where they were living.

The alleged ringleaders of a mafia gang whose criminal tentacles reached into almost every department of Rome's City Hall went on trial Thursday, on a landmark day for Italy's battle against organized crime.

Massimo Carminati, a convicted gangster with a history of involvement with violent far-right groups, and 45 others are accused of operating a mafia-style network that used extortion, fraud and theft to divert millions of euros destined for public services into their own pockets.

Carminati and his alleged right-hand man Salvatore Buzzi, a convicted murderer, followed Thursday's opening session in Rome's criminal court by video link from their prison cells, their presence in court having been deemed a security risk.

Subsequent hearings in a trial scheduled to run until next summer will be held in the Rebibbia prison on the outskirts of the capital.

Prosecutors say the racketeering in Rome went on for years, helped to bring the city to the brink of financial collapse and contributed to the current sorry state of its infrastructure and many of its public services.

Among those on trial are local politicians, businessmen and officials.

All are implicated in rigging tenders and other corrupt schemes designed to siphon off cash destined for everything from garbage recycling to the reception of newly-arrived refugees.

Hundreds more, including former mayor Gianni Alemanno, have been investigated in a case dubbed “Mafia Capitale” by prosecutors.

The scale and nature of the case make it the most significant anti-corruption operation in Italy since the “clean hands” campaign of the early 1990s led to half the country's lawmakers being indicted for taking bribes.

If the prosecution can prove that they did, Carminati, 57, and Buzzi, 59, will face much tougher sentences than they would if found guilty simply of corruption.

Carminati's lawyer, Giosue Naso, said the prosecution were confusing a real mafia organization with the cronyism and nepotism endemic in Italian society.

“I'm from Calabria and my wife likes to joke that when a Calabrese looks for a dentist, they don't look for a good one, they look for a Calabrese one,” he told reporters.

“It is the family-first approach of our society. This is about a morally rotten society, a society with a mafia culture – but that is not the same as real mafia organization.”

For many non-Italian observers, the most eye-opening aspect of the case is that Carminati and Buzzi were ever able to get anywhere near public funds given their backgrounds.

Carminati was given a 10-year prison term in 1998 for having membership of the Banda della Magliana, a criminal crew which ruled Rome's underworld in the 1970s and 1980s and, prosecutors say, has reinvented itself in the form of Mafia Capitale.

Carminati is also a former member of the Nuclei Armati Rivoluzionari (Armed Revolutionary Nuclei), a far-right group that was involved in the 1980 bombing of Bologna railway station which left 85 people dead. He lost his left eye in a 1981 shoot-out with police.

Buzzi, a native of the Magliana suburb of Rome which gave birth to the notorious gang, was convicted in 1983 of murdering an accomplice in a cheque-stealing scam who confessed to police.

The brutal killing — the victim was stabbed 34 times — resulted in Buzzi receiving a 30-year prison sentence. But he served only six years after using his time behind bars to pursue his education and earn a reputation as a reformed character.

Much of the prosecution evidence is based on wiretaps obtained after judges accepted the prosecutors were dealing with a genuine mafia structure.

In one recording, Buzzi is heard boasting that skimming cash intended to feed and accommodate asylum-seekers from Africa and the Middle East is more lucrative than drug dealing.

In another, Carminati seems to describe himself and his associates as the link between the underworld and regular society. “There are the living up above and the dead down below, we are in between, in this middle world where everyone meets,” he is heard to say.