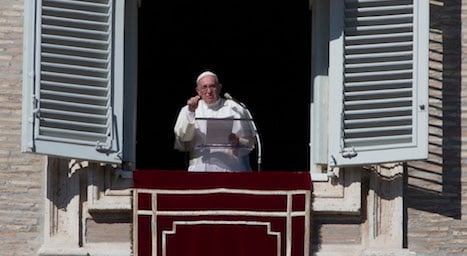 The pope was speaking for the first time since the arrest last weekend of an Italian PR expert and a Spanish priest on suspicion of stealing and leaking classified documents to the media revealing the pope's frustration with his aides over financial mismanagement.

“I want to assure you that this sad fact will not prevent me from the reforms which will proceed with my collaborators and the backing of you all,” he said after Angelus prayers, in reference to the leaks.

Francis has sought to lead a drive for reforms within the secretive Vatican to clamp down on unbridled spending. “I know that many of you are perturbed by the recent news on the secret documents of the Holy See which were taken and published,” he said. “Publishing these documents was an error,” he added. “It was a deplorable act which does not help.”

The leaks spawned two books which quote the pontiff ripping off at his aides. Gianluigi Nuzzi, the author of one of the books, had said that “revealing the secrets can only serve those who are seeking transparency, the first objective of the pope.”

With its verbatim reproduction of the pope's private comments, Nuzzi's new book has evoked painful memories of the 2012 “Vatileaks” scandal centred around documents fed to the media by the butler of then-pope Benedict XVI. Nuzzi also played a central role in breaking that story, which contributed to Benedict's shock decision to retire the following year.