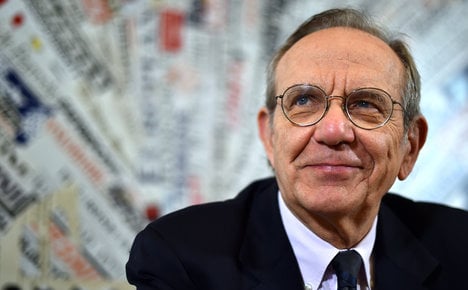 “The OECD report confirms what other international institutions and the government have said: the Italian recovery is strong and continuous,” Padoan told Milano Finanzia on Monday morning.

In its economic outlook report published on Monday, the OECD revised its predictions for Italian GDP growth in 2016 and 2017, increasing them both by 0.1 percentage points to 1.4 percent for both years since its last report in September.

The report stated that Italy's economic recovery was “gradually accelerating” – welcome news for the economy which has seen its growth shrink consistently for the last three years.

According to the report, the revised figures are in no small part down to the reforms put in place by premier Matteo Renzi since he came to power in early 2014.

Labour reforms, which came into force earlier this year and made wholesale changes to workers' contracts and social security contributions, were heralded by the report as marking “a change in direction for Italy's labour market”.

Reflecting this change, the OECD stated that Italy's unemployment rate would drop from its from 12.3 percent this year to 11.7 percent in 2016 and 11 percent in 2017.

The positive news was qualified with recommended actions for Italy to enact to ensure its GDP growth can continue long term.

The report suggested the government lower the tax burden on small business and consumers by increasing tax revenue gathered from green taxes and advised stimulating the credit market by creating 'bad banks' to help manage the country's numerous toxic assets.