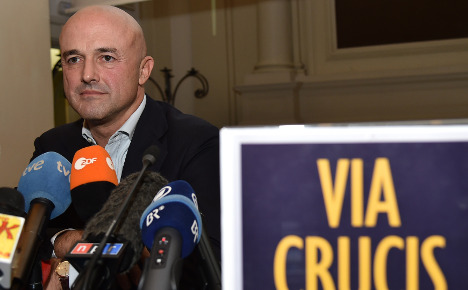 Italian journalist Gianluigi Nuzzi gives a press conference to promote the release of his book "Via Crucis" in Rome. Photo: Alberto Pizzoli/AFP

Journalists Gianluigi Nuzzi and Emiliano Fittipaldi are being investigated for possible complicity “in the offence of divulging confidential news and documents”, Vatican spokesman Federico Lombardi said.

They claimed charity money was allegedly spent on refurbishing the houses of powerful cardinals, while the murky Vatican bank continues to shelter suspected criminals.

The Vatican's prosecutors have also opened another investigation after the disclosure of a secret document concerning the Administration of the Patrimony of the Apostolic See (APSA), the Holy See's general accounting office.

Lombardi said the APSA is not under investigation.

The head of Italian investment bank Banca Finnat, Gianpietro Nattino, is, however, suspected of using the organization for money laundering.

The controversy has evoked painful memories of the 2012 “Vatileaks” scandal centred around documents fed to the media by the butler of then-pope Benedict XVI, which contributed to his shock decision to resign the following year.

The storm prompted the Vatican to introduce new legislation in 2013 that threatens up to two years in jail or a fine of up to 5,000 euros ($5,400) for anyone who “procured illegitimately, or reveals information or documents whose dissemination is prohibited”.

Particularly shocking were alleged wiretaps of the pope's private conversations included in Nuzzi's book, “Merchants in the Temple”.

Both of the suspected moles served on a special commission set up by Pope Francis to advise him on economic reform within the Vatican to clamp down on unbridled spending.

Vallejo Balda continues to languish in jail but Chaouqui, a former social climber who raised eyebrows when racy pictures of her went viral on the Internet, has been released after cooperating with authorities.

In a Facebook post, the Italian denied leaking “even one piece of paper” and said “there is nothing I have ever loved more or defended more than the Church and the pope”.

Lombardi said Vatican investigators were also looking into other people “who may have cooperated in acquiring the confidential documents”.

Francis was tasked by his cardinal electors to stamp his authority on the bickering Curia, the Church's governing body, and clean up the Vatican bank – but the fresh leaks looked set to fuel criticisms of his reform programme.

The pope on Sunday pledged to forge ahead with spending reforms within the Church, while condemning the leaks.

“Publishing these documents was an error,” he said after leading Angelus prayers. “It was a deplorable act which does not help.”