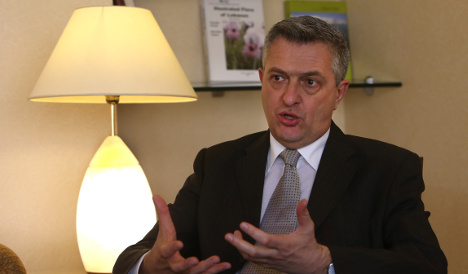 The 58-year-old diplomat will replace Antonio Guterres, of Portugal, who was UN High Commissioner for Refugees since 2005, a UN statement said.

Grandi, who will take up the job on January 1st, beat out former Danish prime minister Helle Thorning-Schmidt and German Achim Steiner, the director of the UN Environment Program, for the key appointment.

Thorning-Schmidt, who became an Internet sensation after snapping a selfie with President Barack Obama, had lobbied for the job since stepping down in June.

The choice of Grandi was seen as a nod to Italy, which has been hard-hit by the refugee crisis in Europe, but also as recognition of Grandi's work in several tough UN positions.

Among those was his challenging work as head of the UN Palestinian refugee agency UNRWA from 2010 to 2014, a post he held after serving as its number two from 2005 to 2010.

Denmark's restrictive policies on refugees were cited as weighing against Thorning-Schmidt.

There were also concerns about representation given that a Danish national, Michael Moller, heads the UN office in Geneva.

Before taking over the top posts at UNRWA, Grandi worked as deputy envoy to the UN aid mission in Afghanistan and was UNHCR's chief of mission there.

Throughout his 25-year career at the UN, he was involved in UNHCR efforts in Sudan, Syria, Turkey and Iraq, and led humanitarian operations in Yemen and the Democratic Republic of Congo, among other countries.

The appointment is expected to be endorsed next week by the UN General Assembly, a move widely seen as a formality.

Guterres is due to step down at the end of the year after overseeing efforts to help 60 million people worldwide who have been driven from their homes by wars and persecution.

UNHCR has said that number marks an all-time high, surpassing the 50 million people who were displaced during the Second World War.