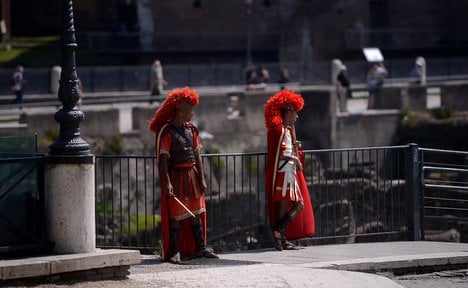 New legislation has been proposed to tackle the illegal photo opportunity Gladiators in Rome, who it is thought can make up to €12,000 a month tax free. Photo: Filippe Monteforte/AFP

Estimates suggesting that the sometimes abusive photo souvenir workers could take home between €300 and €400 a day, or €12,000 a month, tax-free, have angered officials in Rome, according to a report in Il Messaggero.

“They are completely unauthorized,” a spokesperson for Rome's city council told the paper.

“But given there is no legislation against them it often happens that the police just leave them be.”

Now, the new interim Commissioner of Rome, Francesco Paolo Tronca, who took over from the ousted mayor, Ignazio Marino, earlier this month, wants to create more rigid legislation that will prevent the centurions from operating in Rome.

The move comes amid a crackdown on those making iIllicit profits from Rome's six million visitors a year, and ahead of the 'Jubilee of Mercy' which will bring millions of pilgrims to Rome in 2016.

But similar promises have been made by Rome's city council before.

In April 2012, the council promised to rid the area around the Colosseum of illegal centurions but two years later the situation is worse than ever, as more and more people are seeing it as a way to make good money.

The scamming centurions have a simple but effective way of operating.

First, they offer you a photo, supposedly “free of charge”, but by the time you have held the gladiator's shield and sword aloft and cried 'ave Cesare' for the camera, the tip the centurion requests is exorbitant.

Most of the time, tourists manage to talk them down, but jet-lagged travellers from distant lands who haven't quite worked out the conversion rate of their currency into euro are often conned out of €50 for a few simple snaps.

Sometimes their methods are even more clandestine. A recent viral video showed a Romanian TV crew getting their wallets stolen by a group of Colosseum centurions who took €100 as compensation for a couple of photos in front of Rome's most iconic building.

In the video, the Romanian film crew ask the onlooking police to help them get their money back but the forces of the law advise them it's better not to take action.

And it's not just the Colosseum either. The tacky performers have branched out to other areas of the city as the lucrative racket becomes increasingly popular.

“The centurions who ask you for a photo are absolutely unlicensed. They are very organized and the problem is getting worse as these days a lot of foreign people becoming centurions too,” Hélène, a French ex-tour guide in Rome told The Local.

“That said, different tourists want different things and I've honestly worked with visitors who were keen and eager to have their photo taken with a gladiator, and happy to pay for it. I'm not sure how successful new legislation will be but if anyone wants a photo I would strongly recommend they agree the price first.”

In spite of their notoriety the centurions continue to have a lot of success.

“I got stung by one recently when I was on holiday,” Tom, a student from Liverpool, told The Local.

“At first I just thought he was just being friendly and so I chatted to him and we got a picture together. But then he asked me for €20 – I couldn't believe it! I told him he was a thief!

“In the end I managed to talk him down to €5 but that's still a lot of money for a rubbish selfie.”