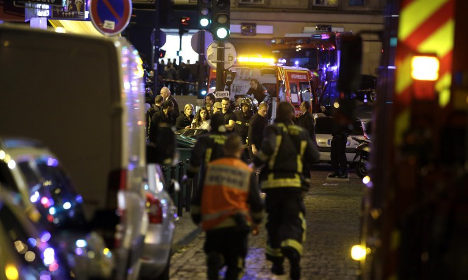 The attacks in Paris have left at least 127 people dead. Photo: Kenzo Tribouillard

Interior Minister Angelino Alfano said that the national committee on order and public security would meet on Saturday.

Within hours of the attacks in Paris, Isis supporters took to Twitter to gloat about the atrocity and claim that “London, Washington DC and Rome” are next on the list.

Ansa reported that two Italians were injured in the shootings and bombings which took place at six locations across Paris, including the famous Bataclan concert hall and the Stade de France, where a friendly match between Germany and France was taking place.

The news agency also said an Italian girl was missing.

Rome, particularly the Vatican, has received persistent threats from Isis group over the past year.

Italy's premier was among the first world leaders to condemn the attacks.

“By striking France they strike the whole of humanity and Italy stands by France's side,” he said at a press conference on Saturday morning.

“Like all Italians I know that the terrorists won't win.”

Following the attacks, the Italian Foreign Ministry confirmed that Iranian President Hassan Rouhani has postponed his visit to Italy and France.

Rouhani was due to arrive in Rome on Saturday.

Pope Francis on Saturday said he was “shaken” by what he described as the “inhuman” attacks on a string of Paris venues.

“I am shaken, I don't understand these things, done by human beings…There cannot be justification, religious or human. It's inhuman,” an emotional pontiff pope said during a telephone interview with TG2000 television.

Grappling to find the right words, the Pope added: “I am with all those with suffer, and with France, which I love so much.”

Italy is also on high alert ahead of the year-long Holy Jubilee of Mercy, which gets underway on December 8th.

Vatican spokesman Federico Lombardi addressed concerns about safety for pilgrims heading to Rome for the event.

Millions of Christians are expected to travel to the Holy See.

“These murderers, possessed by a crazed hatred, are justly called terrorists because they want to spread terror,” Lombardi said.

“If we let ourselves be scared, they will have attained their main objective,” he said, calling on followers to show “courage and resist the temptation of fear.”

Italy’s anti-terrorism chief Giuseppe Governale said on Thursday that the threat of a terrorist attack during the event cannot be completely eliminated, despite efforts by authorities to lower the risk.

“There is constant monitoring of those people who operate clandestinely and become radicalized but this does not eliminate the risks…No one is able to eliminate them.”

His comments came on the day police announced a sting on a European ‘jihadist network’ that was allegedly planning to kidnap diplomats and carry out attacks to try to spring its leader out of detention in Norway.

Seventeen arrest warrants were issued and 13 people were detained in Italy, Britain and Norway, according to Eurojust, the EU's Judicial Cooperation Unit.