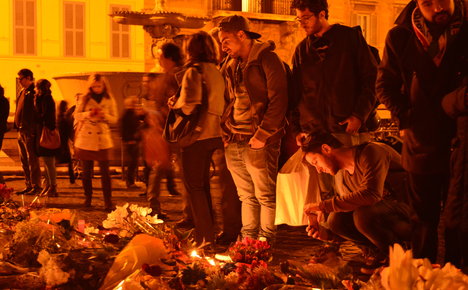 Crowds visit a memorial for the victims of the Paris attacks in front of the French Embassy in Rome. Photo: The Local

In Rome, people came to the central square of Piazza del Popolo on Saturday night and lit candles, lay flowers and wrote touching messages in support of the French people.


People gathered in Rome's Piazza del Popolo to lay candles and messages of support on Saturday. Photo: The Local.

“This reaction doesn't surprise me,” 65-year-old Angelo told The Local. “It feels natural and right to come here and show our support for the French people.”

Amid the sombre mood, there was also fear and tension.

On Saturday the Italian government raised its terror alert and warned that Rome could be a target for Isis – especially with the Jubilee of Mercy set to get underway in December.

“It's difficult not to think Italy might be next. The papers say Rome could become a target and terrorism is something that involves us all,” Angelo added.

A short walk along Rome's central via del Corso, in the square in front of Palazzo Farnese – currently the seat of the French Embassy in Rome – a sea of flowers, candles and cards lined the ground by Sunday evening.

But amid a united front in condemning international terror, there were diverging views about what Italy should do next to deal with the threat of Isis.

“We should perhaps look at limiting how many migrants we accept too.”

But it was not an opinion everybody shared.

“Many of the Paris attackers were second-generation immigrants, so talk of closing the borders is perhaps a bit excessive.”

In October, Defence Minister Roberta Pinotti stated the government was considering deploying tornado aircraft for bombing campaigns in Syria, while earlier this month the US government gave Italy permission to arm two of its Reaper  MQ-9A drones.

Calls have now been made for Nato to step up its military campaign in Syria, with right-wing Northern League leader, Matteo Salvini, leading the calls for Italy to “take arms” against Isis.

“Some people will now call for the Italian government to carry out bombing raids in Syria, which so far they haven't done,” said Ernesto.

“But let's not forget, the reason Paris was attacked on Friday and not Rome was because of France's intervention in Syria.”

Next to Ernesto was Belota, a 62-year-old from France, who has been living with his Greek partner in Rome for two years.

“This outpouring of grief and solidarity is very touching and I am here as a global citizen to stand against all forms of terrorism and extremism,” he said.

“What has happened is a tragedy for France but terrorism is affecting countries all over the world.”