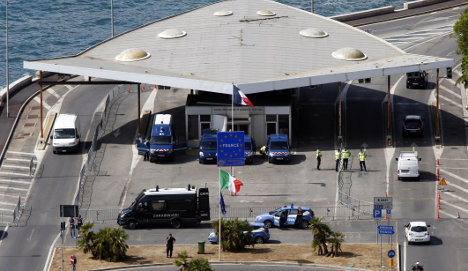 The car supposedly entered Italy at Ventimiglia, on the border with France. Photo: Valery Hache/AFP

However, it later transpired that the car in question had already been found in Paris on Sunday, Italy's Interior Ministry said.

Information that highway police in the Turin area had been told to look out for a black Seat Ibiza, with an alleged suspect inside, was widely reported in the Italian media on Monday.

The information also included the registration details of the car and that it had probably crossed into Italy at Ventimiglia. But the vehicle was found in the eastern Paris suburb of Montreuil on Sunday. It is believed the circular was issued to Italy's highway police on Saturday, the day after the Paris attacks, and not on Monday.

Meanwhile, an international manhunt was also launched on Sunday for 26-year-old Salah Abdelslam, one of three brothers thought to be involved in the attacks that claimed at least 129 lives.

Abdelslam went on the run following the attacks on Friday. It was initially thought that he could have headed to Belgium, but border countries Italy, Spain and Germany have been warned that he could seek refuge in either three, Rai news reported.