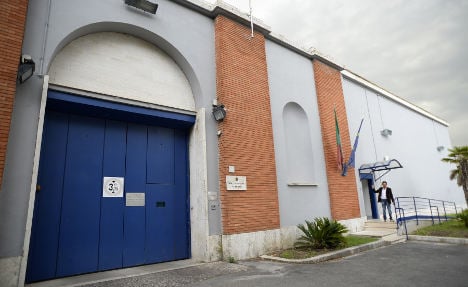 The 'mafia capitale' trial is behind heard at Rebibbia prison, on the outskirts of Rome. Photo: Andreas Solaro/AFP

Massimo Carminati, a convicted gangster with a history of involvement with violent far-right groups, and 45 others are accused of operating a mafia-style network that used extortion, fraud and theft to divert millions of euros destined for public services into their own pockets.

Their trial began in court earlier this month but for Tuesday's second hearing the proceedings were moved to the Rebibbia prison outside the capital, where the case is expected to run until next summer.

Under presiding judge Rossanna Ianniello, the hearing was held in an immense hanger next to the prison block with 60 lawyers, dozens of journalists and supporters of the accused present.

There, behind bars, were most of the defendants in the most significant anti-corruption operation in Italy since the “clean hands” campaign of the early 1990s led to half the country's lawmakers being indicted for taking bribes.

Four more suspects, including 57-year-old Carminati, followed the proceedings from their cells via video-conference.

Carminati is imprisoned in the northern city of Parma. He is suspected to be the head of the vast network of corruption.

The day was dedicated to legal niceties.

According to Ippolita Naso, one of Carminati's lawyers, the questioning of the defendants, who are all being detained in prison or under house arrest, won't begin for months yet.

If the prosecution can prove that they did, Carminati and the others will face much tougher sentences than they would if found guilty simply of corruption.

Carminati was given a 10-year prison term in 1998 for membership of the Banda della Magliana, a criminal crew which ruled Rome's underworld in the 1970s and 1980s and, prosecutors say, has reinvented itself in the form of Mafia Capitale.

Carminati is also a former member of the Nuclei Armati Rivoluzionari (Armed Revolutionary Nuclei), a far-right group that was involved in the 1980 bombing of Bologna railway station which left 85 people dead. He lost his left eye in a 1981 shoot-out with police.

According to the prosecution, his right-hand man was fellow defendant Salvatore Buzzi who was convicted in 1983 of murdering an accomplice in a cheque-stealing scam.

Among the others on trial are local politicians, businessmen and officials.

All are implicated in rigging tenders and other corrupt schemes designed to siphon off cash destined for everything from garbage recycling to the reception of newly-arrived refugees.

Hundreds more, including former Rome mayor Gianni Alemanno, have been investigated in a case dubbed “Mafia Capitale” by prosecutors.