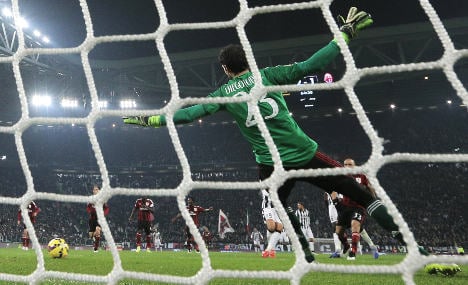 With Europe and the world still reeling from the terrorist attacks that killed 129 people in the French capital, Italy on Thursday began tightening security following an announcement by the FBI that some of the country's tourist hot spots could be targeted.

The Juventus v Milan fixture is expected to be a sell-out and Turin authorities are taking no chances following the explosions outside the France v Germany friendly in Paris last Friday, and the cancellation of Belgium v Spain and Germany v Netherlands over terrorism fears.

Turin's chief of police, Salvatore Longo, said: “There will be more controls with the help of sniffer dogs, the bomb squad and undercover agents.

“The aim is to help calm fears and at the same time call on the assistance of the public to ensure there is a safe environment for everyone.”

Juventus stadium is arguably the most modern in Italy's top flight and security controls are among the tightest in the league.

However, a number of additional measures will aim to allay fears of a potential attack.

Gates will open 45 minutes early, at 6pm local time, nearly three hours before kick-off and 650 stewards will be on duty, as opposed to the 550 usually deployed at league games.

Fans' cameras and video-recording devices, as well as other objects, will also be subject to security checks.