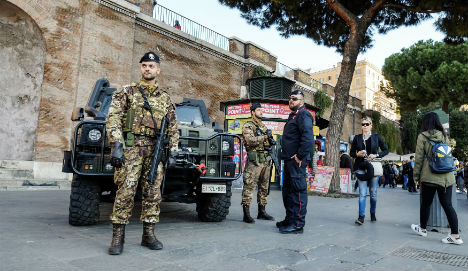 Italian soldiers ourside the Colosseo Metro station in Rome. Photo: Andreas Solaro/AFP
Underground train services in Rome and Milan have suffered a series of service interruptions and station evacuations in recent days as a result of hoax calls.
Police across the country have had to respond to a string of reported spottings of ISIS flags, some of which have turned out to be nothing more than blown-away black plastic bags that have got attached to television aerials.
A section of the country's main north-south highway was temporarily closed to traffic on Friday after a full shopping trolley was spotted in a car park at a service station, sparking a full-scale security alert.
And there was also a false alarm at one of Rome's main hospitals after a doctor reported having spotted a man entering carrying what the medic thought was an automatic rifle.
Jitters among the general public are being fuelled by rumours spread on social media suggesting that the government is aware of an imminent threat of Paris-style attacks but is not sharing the information.
The speculation appears to have started with a recording widely circulated via WhatsApp which featured a voice message from a mother who warns her daughter that the situation is much worse than admitted and that Italy's leaders cannot be trusted to tell the truth.
Renzi said Friday the claim was ridiculous and insisted the government was being as transparent as it could be with its intelligence information.
“I have asked investigators to establish who circulated this message and how,” he said. “In my opinion it constitutes the crime of false alarm.”
It emerged late Friday that the message was the result of an Italian mother being over-protective, rather than trying to stir up alarm. After turning herself into police, the woman admitted she had invented the story about a
cover-up to try and ensure her teenage daughter did not go out.
Renzi said the government was doing everything possible to reduce the possibility of an attack on Italian soil.
“We will do all the checks required, but we have to realise that those who want to shut us away in our homes cannot get the better of us,” he said. “We will not be overwhelmed by hysteria and fear.”
Italy has responded to last week's Paris attacks by deploying hundreds of extra troops to patrol potential targets of terror attacks including major tourist sites, shopping centres, airports and train stations.
In Rome alone, over 140 sites are under armed guard, including St Peter's and the Vatican, where the police presence has been roughly doubled, and the Colosseum, where new metal detectors were being installed on Friday.
On a lighter note, the La Stampa daily reported that a gang of masked robbers had stormed into a bank shouting: “Relax, we are not Isis. It is only a hold-up.”
Url copied to clipboard!