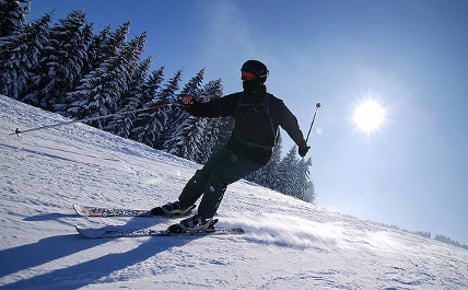 Italy's skiers will be charged up to €200 for first aid on the slopes. Photo: Felix Abraham/Flickr

In the Valle d'Aosta, tourists who get into difficulties on the ski slope will have to pay up to €200 if they require medical assistance from a toboggan or snowmobile .

The scheme is already in place in the Plan de Corones district of Trentino, while in the rest of the Alto Adige region a €100 fee will suffice to get you out of trouble, La Repubblica reports.

The only way to avoid the fine is to ensure you have a written insurance policy before hitting the slopes.

“Having rescue services which you have to pay for discourages abuse,” Nicola Bosticco, managing director of the Bardonecchia district in Valsusa, told La Repubblica.

“Sometimes skiers want to be brought down to the valley in a snowmobile just because they’ve had too much to drink at the bar.”

The hefty fines should make tourists think twice about taking advantage of the resorts' rescue services, but there are other reasons for the change.

Previously, regional authorities have helped finance the helicopters, toboggans and snowmobiles which come to the aid of injured tourists, but Aurelio Marguerettaz, councillor for tourism in the Valle d'Aosta, said that “reduced resources” had led them to look for other solutions.

“It is an excellent service, and we want it to remain that way, but we need to guarantee a financial balance,” said Ferruccio Fournier, president of Valle d’Aosta’s Cable Car Association.

In the Valle d'Aosta region alone, rescue services come to the aid of around 3,500 skiers each year, but Fournier said that many clients are already covered by insurance. He added that in France, Austria and Switzerland, you would pay even more.

In fact, in Italy’s neighbouring countries there are no free rescue services – tourists have to buy insurance with their ski pass if they want to avoid being charged a huge amount in case of emergency. The resorts of Monterosa, Cervinia and Courmayeur-Mont Blanc will offer policies for €3, which will also cover civil responsibility.

In a further effort to crack down on abuse of the system, several regions have started to impose stiff fines for people who request helicopter intervention if they aren't suffering from a serious health emergency. In Trentino, Veneto and Valle d’Aosta, a trip in a helicopter can turn into a bill of thousands of euros, and resorts in Lombardy and Piedmont will soon be following suit.

However, not everyone is convinced of the benefits of this scheme.

“Why should people who get hurt in the mountains have to pay for help when people who get into a car accident while talking on the phone don’t have to?” asked Piergiorgio Baldracco, president of the Alpine Rescue.

“In this way, you risk disadvantaging a part of the population. On the one hand, paying for help raises the level of responsibility among the ski enthusiasts, but on the other it creates disparity.”

Furthermore, there are worries that the lack of a uniform policy across the Alps could cause problems for visitors trying to navigate bureaucracy, leaving them unsure of exactly what is included in their ski pass.

For example, in Piedmont, insurance policies covering damage caused to others are automatically included with ski passes, while in some regions it is up to the customer to ask for insurance.