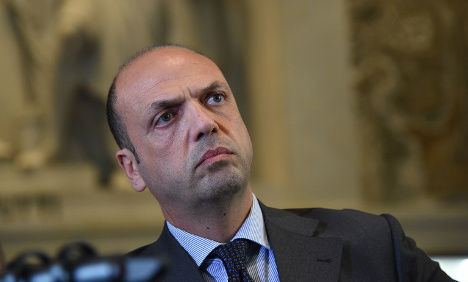 After the tense weekend of false alarms, Alfano spoke to journalist and TV anchor Maria Latella on the programme, L'intervista (The Interview), on Sky Tg24 on Sunday.

“No country has zero risk,” the Interior Minister admitted, echoing comments made by Pope Francis in September 2014, saying: “I think it's true that we are fighting a piecemeal World War Three, the Pope is right. And if this is a world war, we need to rethink alliances.”

Alfano highlighted the need to cooperate with moderate Muslim communities, saying: “We need to distinguish those who pray from those who kill.”

He also said that the Italian government had already expelled “dozens of subjects who had been radicalized” from Italy, including radicalized Imams.

Alfano confirmed that Italy would not be joining in air strikes on Syria, saying that it would run the risk of Syria becoming “a new Libya,” and also said that the Schengen agreement was in need of “revisions”.

“When aiming at security, we have to give up a piece of our privacy,” Alfano said. “But in our country we can be calm; the intelligence system works.

“We have one rule: work to prevent a negative event.”

When asked about the possible risk during the Jubilee year in 2016, Alfano insisted that some voices in the Italian media were “professionals of anxiety” and that Italy's security services were more than up to the job.

“I’m not in favour of being melodramatic, nor of underestimating (the risk),” he said. “We need realism.”

Alfano called on the Italian public to continue going about their daily lives, telling them: “My thought is that our will to live, to be Italians, to preserve our usual routines, is stronger than fear.”

His remarks come at a time when tensions are high in Italy’s major cities. In the past week, suspicious packages, hoaxes and anonymous phone calls have caused numerous false alarms, particularly in Rome and Milan.

On Sunday, there were at least five false alarms in the capital, Il Corriere reported. An anonymous phone call led to the closure of the Metro Line A between Termini and Ottaviano for around half an hour, and Sunday morning mass was interrupted at two churches due to bomb scares.

'I live in Rome and you don't know how harmful it is to know that every day there is a bomb alarm. We live in terror every day, it's a nightmare.'

Abandoned bags also caused panic in Villa Borghese and the Olympic stadium, the latter left by a father while he accompanied his son to the bathroom.

In Milan an Odeon cinema close to the La Scala theatre was evacuated in the evening after a bomb scare, with local police reporting a huge increase in the number of calls to the emergency number 112.

Social media seems to be helping rumours to spread among a nervous population, as in the case of a recording widely circulated via WhatsApp, in which a mother warned her daughter that a friend working in the government had told her about an “imminent attack”.

The woman turned herself into police and admitted she had made the story up to try to prevent her daughter from going out.

'It seems like Rome is empty… everyone in their houses out of fear of possible attacks. As if you can live like that.'

Italy has responded to last week's Paris attacks and a tip-off from the FBI by deploying hundreds of extra troops to patrol potential targets of terror attacks including major tourist sites, shopping centres, airports and train stations.

In Rome alone, over 140 sites are under armed guard, including St Peter's Basilica in the Vatican, where the police presence has been roughly doubled, and the Colosseum, where new metal detectors were being installed on Friday.