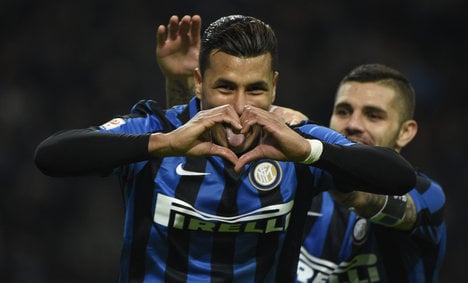 Inter's defensive game has been the bedrock of their push for a first title since their treble-winning season in 2010, although the Nerazzurri have also been conspicuously short of goals.

Inter had been given a huge incentive when overnight leaders Fiorentina were held to a 2-2 draw at home by Empoli, 24 hours after fellow title contenders Roma were held by the same scoreline at Bologna.

Those results left Napoli top of the pile on goal difference after Maurizio Sarri's men saw Lorenzo Insigne and Gonzalo Higuain strike in a 2-0 away win at Verona earlier on Sunday.

But Inter capitalised on Frosinone's current struggles to remain firmly in the title race.

Mancini was quick to stress his side hit two late goals when Frosinone had little left to offer, but the Italian was delighted his side are among the “three or four” currently in title contention.

“Tonight two of our goals came late when we caught Frosinone short, but we'll happily take it,” Mancini told Mediaset.

“The championship is still long, there are still 25 games to go. I think three or four teams are in pole position, but we're happy to be among them.”

Jonathan Biabiany broke the deadlock on the half-hour after ramming the rebound from an Adem Ljajic strike in under the crossbar to hit his maiden league goal for the club, and almost immediately Inter began to play with swagger.

It was only the second time this season Inter had netted two goals in a league game, but defender Jeison Murillo made it 3-0 three minutes from the final whistle when he beat Leali from Stevan Jovetic's backheel after Ivan Perisic's decisive run.

The three-goal cushion prompted Mancini to replace Icardi with Marcelo Brozovic, and the Croatian seized the day when he burst downfield after linking up with Ljajic to fire past Leali.

Inter now have 30 points and a two-point cushion on Napoli and Fiorentina, with Roma a point further behind.

Earlier, Higuain hit his 10th goal of the campaign to take the lead in Serie A's scoring charts to fire Napoli one-point clear of Fiorentina after victory over struggling Verona.

Kalinic to the rescue

But Fiorentina maintained their hopes in what continues to be a thrilling battle for this season's scudetto and were unlucky not to go two points clear after spurning a series of late chances at the Artemio Franchi.

Empoli travelled to Florence looking for their fourth win in six league outings and were well on their way after taking a 2-0 half-time lead thanks to goals from Marko Livaja and Marcel Buchel.

Paulo Sousa had rested his most potent strike pair, Nikola Kalinic and Josip Ilicic, with one eye on Thursday's Europa League clash against the coach's former club, FC Basel.

But Kalinic and Federico Bernardeschi replaced Mario Suarez and Ante Rebic for the start of the second half and Kalinic hit a brace inside five minutes to pull the hosts level.

Kalinic could have secured his second hat-trick of the season, after his triple in a 4-1 win at Inter, 13 minutes from the end but saw his first-timer from eight yards out glance off the top of the crossbar.

Sousa said he would not repeat the same starting line-up.

“After seeing our performance in the first half, I wouldn't send out the same starting team again,” he told Mediaset.

“We're very happy with our second half and showed enough character to level and also win. I think we deserved more.”

Champions Juventus finished the weekend in sixth place after claiming a third consecutive win for the first time this season with a 1-0 victory over AC Milan on Saturday.

But Massimiliano Allegri's men, who host Manchester City in the Champions League on Wednesday, remain nine points off the pace.