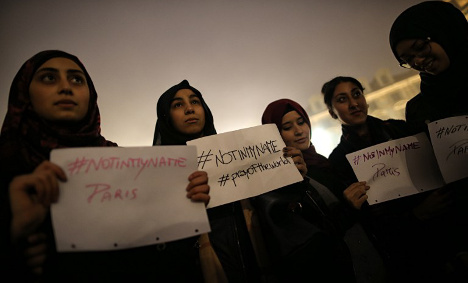 Muslim girls hold posters with the slogan 'Not in my name' at a Turin rally in memory of the victims of the Paris attacks. Photo: Marco Bertorello/AFP

Since Isis militants killed 130 people in Paris in a series of horrific coordinated attacks ten days ago, Italy's shocked Muslim community has been vocal in its condemnation of terrorism.

At the same time, members of the community are conscious they must play an active role in preventing a possible backlash against them.

After the attacks, The Local spoke to Elzir Ezzedin, Florence's imam and head of Italy's Muslim Union, who emphasized that allowing fear to lead to segregation would be playing into the hands of terrorists.

“This is a moment of fear and of rage for Italian Muslims,” Ezzedin told The Local.

“But our duty as men of faith, as citizens, as human beings, is to be united. In this historic moment we must come together to condemn terrorism and overcome fear, we must not give victory to terrorism. Fear is natural but we must work together to go forward and have courage.”

Speaking about the rallies taking place in Italy in support of the victims of the Paris attacks, Ezzedin explained: “We made the choice to have these gatherings as a community, not as Muslims but as citizens, all together.”

He added: “The aim of terrorists is to create a barrier between Muslims and other members of the community, so it is up to us to defeat this by building bridges, building a dialogue and not letting terrorists shut us off from each other.”

The woman's sign reads: 'Together against terrorism'. Photo: Giuseppe Cacace/AFP

But although the vast majority of Muslims have spoken up to distance Isis from the values of Islam and to express solidarity with the victims in France, it is also clear that Isis does represent a threat to Italy.
Following an FBI tip-off, Italy's police are on the hunt for five terror suspects with links to the extremist group, and La Repubblica reported that a 24-year-old Italian was arrested for hate speech after saying on television that he thought the Paris attacks were “right”.
In this climate, there have been signs of a worrying backlash against Italy's Muslims.
The Il Gazzettino newspaper reported that a Venetian judge, Carlo Nordio, had called for the veil or hijab to be banned “in the interest of security”, with a survey on the newspaper’s website revealing that 90 percent of readers were in favour of the idea.

A video published by Italian newspaper La Repubblica (below) showed a couple dressed in typically Muslim clothes, the woman in a full niqab with only her eyes visible, walking through the centre of Milan. Cameras recorded the glances and comments made by passers-by, including references to Isis.

And even more worryingly, two attacks on Muslim women have been reported in Bologna, a town usually known for its liberalism, since last the attacks in Paris. Il Fatto Quotidiano reported that one 22-year-old Muslim, named only as Melania, had been accused of supporting Isis by a woman who ripped the veil from her head. A second woman, 20-year-old student Fatima, said that someone called her a terrorist in the city’s central square and shouted that she should “go back where she came from”.

Last week, The Local spoke to Sarah Ager, a British-born Muslim and teacher living in Bologna, who explained how her daily life had been affected by the recent attacks.

“The atmosphere in my classroom changed after the Paris attacks,” she said, suggesting that the tragedy has created an opportunity for dialogue between faith groups.

“Adults who might have normally shied away from topics like religion and politics wanted to ask my opinion, share their feelings and try to make sense of what had happened. They had a real desire to learn more about Islam from a Muslim who was vastly different from the type of person normally associated with Islam in the media and the news.”

But Ager accepts that there is a danger of increased Islamophobia after the attacks.

“I also found myself experiencing difficult moments in the classroom, when young children would make negative comments about Muslims in general, such as 'I want to hit all the people who pray to Allah!'” she said.

“When I asked them if they thought I was violent because I was a Muslim, they were completely shocked. They had not made the connection that the person teaching them was also a Muslim.”

Like Ezzedin, Ager thinks that the best way to deal with the inevitable fear is to work on dialogue between faiths.

“When I speak to Italian children, I often feel that they lack basic awareness of world religions. In many schools, religious studies appears to focus on Catholic studies, but in today's climate of increasing fear, division and misunderstanding, religious education is more important than ever.

“Children should be provided with information about diverse beliefs, the opportunity to ask questions, and the tools needed to think critically about what they themselves believe as well as what it means to be a global citizen in a multicultural world where people of all faiths and none live side by side,” Ager said.

“Recent immigration brings with it both opportunities and challenges and by focusing on educating citizens about other faiths and beliefs, there is hope that we can collectively reject division which terrorists seek to create and instead learn to live alongside each other peacefully.”

PARTNER CONTENT
The future of work: How can we prepare our children for the world of 2032?
Url copied to clipboard!