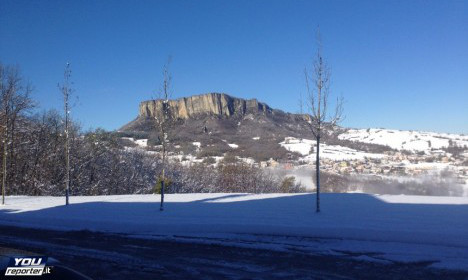 Wintry weather has arrived in Italy and is here to stay. Photo: YouReporter.it

By Sunday the northern Alps were covered by the first winter snows, which reached altitudes as low as 400 meters above sea level in the coastal province of Liguria.

In the mountainous central region of Abruzzo the 3,000-meter Gran Sasso peak also received its first dusting of the winter, which was immortalized by one Twitter user.

The arrival of the first winter snow to Italy's mountainous areas will come as a relief to worried workers at Italy's ski resorts. Up until late last week record temperatures had been recorded for November, with last year's snow continuing to melt above 2,500 meters.

But it wasn't just those in the mountains who were feeling the pinch. Strong winds have been creating rough seas in the north easterly Adriatic coast, where members of the public have filmed dramatic waves breaching the sea walls near Ancona.

And meteorologists are predicting no end to the wintry weather anytime soon. A Mediterranean cyclone is set to arrive on Thursday, causing widespread bad weather.

By the end of the week, snow will cover even the low-lying plains of Abruzzo, which sit at just 200 meters above sea level. Experts are blaming the turbulent weather on this year's record strength El Niño.

Away from the mountains, night-time temperatures are set to drop as low as zero in the northern cities of Milan and Turin, while the temperature in Rome will remain firmly in single digits.