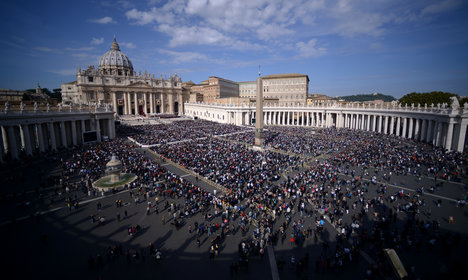 The OSCE has asked the Vatican to withdraw criminal charges brought against the 'vatileaks' journalists. Photo: Filippo Monteforte/AFP

“Journalists must be free to report on issues of public interest and to protect their confidential sources,” said Dunja Mijatovic, media freedom representative at the Organization for Security and Co-operation in Europe.

“I call on the authorities not to proceed with the charges and protect journalists' rights in accordance with OSCE commitments,” Mijatovic said in a statement.

The Vatican said on Saturday that it has charged journalists Emiliano Fittipaldi and Gianluigi Nuzzi along with three other people for the “unlawful disclosure of information and confidential documents”.

Unlike Italian law, Vatican law does not allow journalists any rights to protect their sources.


Both have written books that use classified documents to back up allegations of corruption, theft and uncontrolled spending at the Vatican.

Also charged were Angel Vallejo Baldo, a Spanish priest suspected of leaking the documents, and his alleged accomplice Francesca Immacolata Chaouqui, an Italian public relations executive, both of whom were arrested this month.

Along with the fifth person charged, Nicola Maio, both were members a now defunct special commission set up by Pope Francis to advise him on economic reform within the Vatican.

The first hearing was due to begin on Tuesday, with all five risking up to eight years behind bars if convicted.

The Holy See is one of 57 member states in the OSCE, the Vienna-based East-West body formed during the Cold War involved in monitoring conflicts, election observation and media rights.