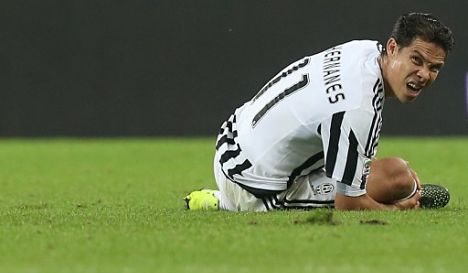 Juve's star midfielder Hernanes has been ruled out of Juve's clash with man city with a thigh injury. Photo: Marco Bertorello/AFP

The Brazilian international, already out of Wednesday's Champions League clash at home to Manchester City due to suspension, suffered the injury in Saturday's 1-0 home win over AC Milan and is now set to miss upcoming league games against Palermo, Lazio and Fiorentina.

A statement by the Serie A champions said: “Today Hernanes was subjected to scans following the muscle problem he suffered in the game against Milan.

“The scans revealed a first grade tear in the adductor muscle of his right thigh. His return to competition will be in around three weeks.”

Ahead of Wednesday's fixture, which could see Juventus qualify for the last 16, the Italians are sweating on the availability of France left back Patrice Evra, who suffered an ankle knock on Saturday.

Juventus will qualify for the knockout phase with a win, or with any result if Sevilla do not beat Borussia Monchengladbach on Wednesday.

City, stunned 4-1 at home by Liverpool at the weekend, will clinch first place in the group with victory in Turin.