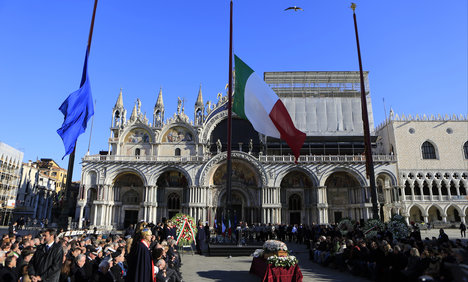 Valeria Solesin, the Italian Victim of the Paris terror attacks was laid to Resit in Venice on Tuesday. Photo: Pierre Teyssot/AFP

Hundreds of mourners led by Italian President Sergio Mattarella gathered in St Mark's Square on a cold but sunny day.

Solesin's coffin, covered in white lilies and red tulips, arrived aboard a gondola to the famous square where the flags of Italy, Venice and the European Union flew at half mast.

A doctoral student, Solesin had lived in Paris for several years.

Her parents Alberto and Luciana, brother Dario and her fiance Andrea Ravagnani stood before the coffin.

Valeria Solesin was among the 90 fans who were massacred at the Bataclan concert venue in the jihadist attacks of November 13th. In total, 130 people died in the coordinated shootings and suicide bombings.

“Valeria was a beautiful person, studious, committed and generous – and she was the victim of barbarism, insanity,” said Venice Mayor Luigi Brugnaro, recalling that she had worked as a volunteer for the Italian humanitarian group Emergency.

Her father told the mourners: “We think of those all over France and Europe who mourn as we do a daughter, a son, a spouse, a friend.”

Speakers representing the Christian, Muslim and Jewish faiths spoke at the funeral.

“Never, never will we share with you what belongs to you – hatred,” said Monsignor Francesco Moraglia, the Catholic patriarch or bishop of Venice. “You will not succeed in getting yourselves hated by us. That would be your victory. That would be our defeat.”

Italian Defence Minister Roberta Pinotti read a message from French President Francois Hollande: “We will not forget Valeria, who came to study in our country through love of life and culture.”

PARTNER CONTENT
Would your career benefit from an EMBA?
Url copied to clipboard!