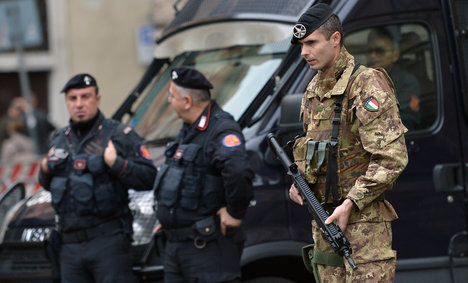 Police found the illustrated manual, entitled “Organizing Guerilla Urban Warfare”, on the hard drive of the laptop of Abdelkrim Kiamoussi, alongside an audio file called “Techniques of War in the City”, Corriere Della Sera reports.

The files contain information on how attacks similar to those carried in Paris on November 13th might be executed in Italy and provide guidelines on how to carry out a successful attack.

There were also terrifying details of the firepower each terrorist would be equipped with before an attack.

“If command decided to attack the European Central Bank [in Frankfurt] and wanted 12 mujaheddin, each one would be equipped with a 20kg explosive belt so as to enter the building without hindrance. They must destroy the building from within,” the manual explained.

The files also show information pertaining to the structure and organization of cells that will be useful to Italy's security services in preventing future attacks.

The manual describes how jihadists only have contact with the boss who recruited them avoiding interaction with fellow members of the cell. Bosses will also change their address immediately if a recruit is arrested.

According to the manual, not all members of the terrorist cell will be actively engaged in carrying out the attack, rather each cell is divided into four areas covering command, arms and weaponry and reconnaissance, which all work to support the group who attack.

Kiamoussi was expelled from Italy on Friday along with three other Moroccans for circulating jihadist propaganda.

So far this year 59 suspected jihadists have been deported from Italy.