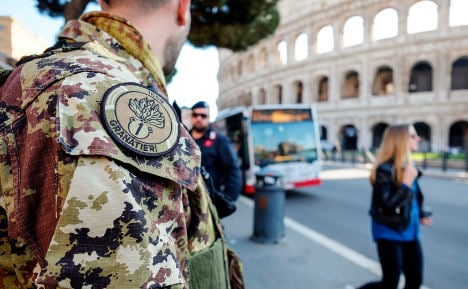 Italy has tightened security in the wake of the Paris attacks. Photo: Andreas Solaro/AFP

In a speech at Rome city hall, he said €500 million euros would be earmarked for cyber-security and modernizing the police force, and €500 million for the Italian armed forces.

Another €1 billion will also be spent on culture and sport, as “we have to remember who we are,” Renzi said.

“Italy's belief, which resounds loudly in Europe and throughout the world, is as follows: for every extra euro invested in security, an extra euro must be invested in culture,” he said.

The additional funds for culture will be divided equally among investment in projects in large cities and their outlying areas and among incentives for young people and for tax breaks for those who wish to set up cultural associations.

“Their vision is one of terror – we will reply with culture,” he said.

The measures will be funded in part by postponing by one year a planned reduction in corporate taxes.

Renzi also raised the possibility that Italy's budget restrictions may be strained by the extra cost.

The “pact of humanity” was more important than the eurozone's stability pact, he said.

Renzi is to visit France on Thursday for talks with French President Francois Hollande following the November 13 terror attacks on Paris that left 130 dead and 350 injured.