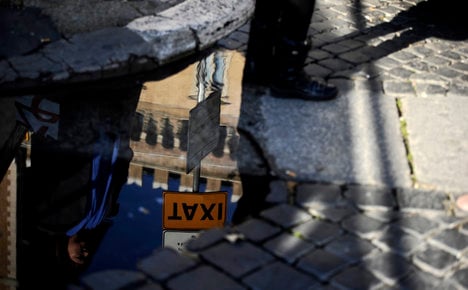 Uber have said they want to create a new 'U-line' across Rome in December. Photo: Filippo Monteforte/AFP

The experiment, which will last two weeks, will involve a circular route consisting of eight stops, which the US-based company hopes will improve the well-documented problems the city has with its poor public transport links.

The chosen eight stops will be manned by a constant supply of black cars and minibuses, which will help to transport people in the capital between December 10th and 24th.

But in choosing where to place its eight stops Uber has taken the unique decision of outsourcing the idea to its users and is inviting citizens to suggest their ideal route at www.linea-u.it.

Would-be route planners will have until December 9th to make their suggestions and the chosen U-line will be officially announced when the service starts the next day.

The U-line launches just two days after the 2016 Holy Jubilee of Mercy gets underway – an event that will see hundreds of thousands of pilgrims come to Rome.

While the Eternal City has long been criticized for its public transport connections, problems have been exacerbated in recent months by erratic strike action from transport unions.

On Tuesday, unions in the capital announced they had reached an agreement about when they would be striking in order to guarantee that visitors during the Jubilee would not be left stranded.

In spite of the agreement, Uber is still confident that the short term U-line would have great success.

“With our accessible and popular product we want to offer an alternative to public transport,” Tursi said.

But Uber has long been a controversial topic in Italy.

Although the company's cab service is still legal, Italy's highest court banned the use of another service known as 'UberPop' in May.

'UberPop' allowed everyday drivers and not just those with a taxi or chauffeur's licence to take fares, but was outlawed after taxi drivers from cities all over the country protested that the service represented unfair competition.