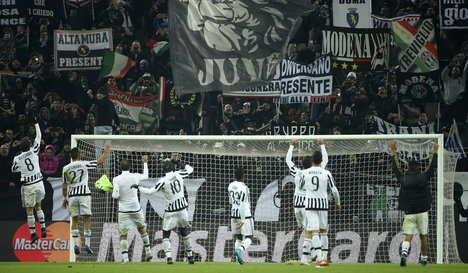 Juventus qualified for the next round and went top of group D after beating Man City at home. Photo: Olivier Morin/AFP

City have never finished top of their Champions League qualifying group and last season were eliminated in the knockout round by Barcelona, who went on to beat Juventus in the Berlin final.

Manager Manuel Pellegrini put a positive spin on his side's chances but few punters would bet against Juve not claiming at least a draw away to Sevilla next month having already given the Spaniards a footballing masterclass in a 2-0 victory in Turin last month.

“We have to see what Juventus will do against Sevilla. It will be a very difficult game they must play away. Sevilla have to win that game to try to qualify for the Europa League,” said Pellegrini.

“There's one game more, and the group is not finished.”

To boot, City lost 'keeper Joe Hart to injury with 10 minutes remaining and he is now doubtful for this weekend's game at home to Southampton.

City had already qualified following their 3-1 win at Sevilla but thei chances of avenging their 2-1 defeat to Juventus at the Etihad Stadium in September looked doomed from the outset.

City forwards Wilfried Bony, David Silva and Samir Nasri are all still sidelined but the absence of Belgian centre-back and captain Vincent Kompany was most felt as Juventus built on their solid home form.

Juventus, who deployed a 3-5-2 amid injury concerns of their own, survived an early scare when Fernandinho fired just wide of Gianluigi Buffon's post after Kevin De Bruyne fire a cross into the area from the right.

Juve were let off again after Giorgio Chiellini got tangled up with Yaya Toure in the area and Fernandinho pounced, only to flash over from 10 yards out.

Moments later, the visitors were stunned when Alex Sandro fired a delightful cross into the path of Mandzukic, who muscled his way past Nicolas Otamendi to finish from close range.

Pellegrini later complained: “They scored a goal which I think was a foul before Mandzukic finished but the referee didn't blow the whistle.”

City were briefly left with 10 men when Jesus Navas fell under a challenge from Sandro, and Juventus brazenly capitalised only for Hart to produce a great reflex on Mandzukic after he was set up by Lichsteiner's header.

Hart produced another great stop with his arm to thwart Lichtsteiner after he was sent through on the right side by Mandzukic.

City spurned a great chance in a bright start to the second half when Fernando rose above the Juve defence at a corner to fire in a header which Buffon turned onto the post and then smothered while under pressure from Martin Demichelis.

But in open play, Juve were a class apart and Alvaro Morata, who replaced Mandzukic on 54 minutes, spurned several chances to double the hosts' lead.

Allegri admitted the match could have gone either way but said Hart had made the difference on at least one occasion.

“It was a game with plenty of chances from both sides. We could have doubled our lead, then immediately after they could have pulled level,” said the Italian.

“They came close to equalizing at the half-time whistle, then Hart made a great stop for them to stop Mandzukic.”

He added: “It wasn't an easy group. Borussia (Moenchengladbach) had a fantastic last season and Manchester are a technical side with top players.

“It's never easy to win a Champions League game. We've done that, again, while not conceding a goal at home. We're proud of that statistic so the lads deserve all the credit they get.”