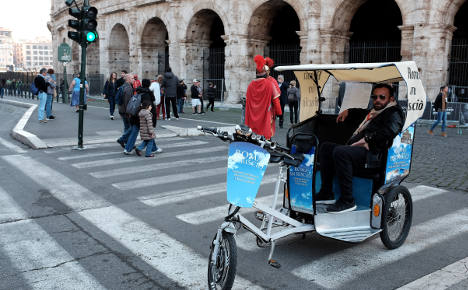 As of Thursday men who dress up as soldiers of the ancient empire and offer to pose for tourist snaps in return for cash were banned from the streets around the Colosseum and the rest of the Eternal City.

But the new legislation will also prevent licenced guides from accosting visitors outside the Colosseum to offer them a tour, La Repubblica reported.

“Rickshaws and gladiators are illegal but we are not,” yelled the man from an archway 12 meters above the ground.

“We are just doing what people do at tourist hotspots the world over. This new law will kill our sector and put 2,000 jobs at risk,” he continued, before demanding to speak to the city's interim mayor, Francesco Paolo Tronca.

After spending two hours at the top of the Flavian Amphitheater, the man climbed down as members of the police, fire brigade and a crowd of curious onlookers looked on.

Some members of the crowd Tweeted pictures of the man's protest.

But he is by no means the first protester to hit the headlines for death-defying climbs on Italy's monuments.