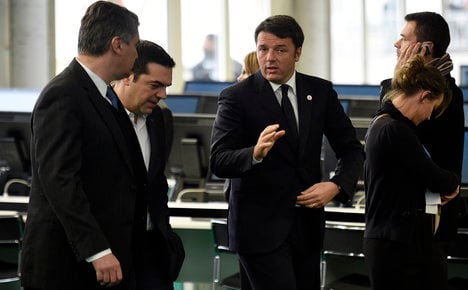 Matteo Renzi (centre) has promised that Italy will be on the frontline in the fight against climate change. Photo: Martin Bureau/AFP

“Italy wants to be one of the protagonists fighting against selfishness and supporting non-negotiable causes like the defence of our planet,” news agency Ansa reported Renzi as saying.

Renzi underlined the importance of the conference, which will see the leaders of 147 countries convene to try to find a solution to global warming: a problem Renzi stated would require a coordinated and long-term response.

“The world of today and tomorrow is looking at Paris. It's a challenge that involves all of us, our children and our grandchildren. We need to take action now because we are at a crossroads.”

The conference in Paris is seeking to achieve a legally binding agreement on climate change that will involve all countries worldwide. The aim is to limit greenhouse emissions before global temperatures rise 2C above pre-industrial levels.

“There were moments of heated debate over lunch,” the premier said. “It won't be easy to reach an accord but it's vital that we do.”

Scientific consensus suggests that once temperatures rise 2C above pre-industrial levels the problem of global warming will spiral out of human control due to natural consequences such as melting permafrost releasing methane gas.

But ahead of the conference Renzi was buoyant, highlighting Italy's impressive track record in reducing emissions so far.

“We have to get away from the idea that Italy doesn't do enough,” he added.

In spite of his insistence that the country's climate change policies were successful, on Monday morning an EU report said the country had the highest number of premature deaths due to air pollution among member states.