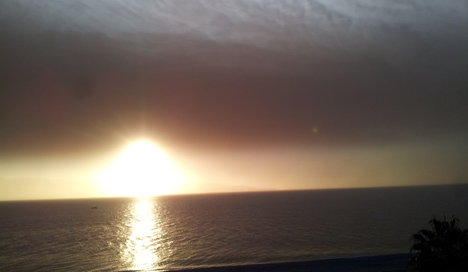 The ash cloud caused by an eruption of Mount Etna above the Strait of Messina. Photo: YouReporter

In the course of the eruptions, the volcano spewed out a huge column of black ash, which rose kilometers into the sky and emitted spectacular fountains of lava that residents captured in the video below.

Hours after the volcano started to erupt, ash began to fall on the Sicilian city of Catania, which sits directly under the volcano.

Residents in the Sicilian city of Messina and Reggio Calabria on mainland Italy, just over the Strait of Messina, woke up to find their cities covered in a fine dusting of ash.

The ashfall, captured in the video below, has created difficult conditions for motorists and poses a particular risk to anyone travelling on motorbikes.

Residents took to Twitter to post photos of thier view of the eruption, often with spectacular results.