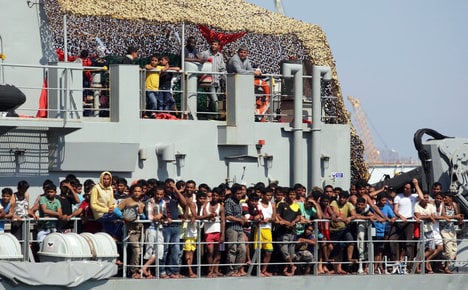 The Italian navy helped rescue 1,500 people off the coast of Libya on Thursday. Photo: Marcello Paternostro/AFP

The migrants were plucked from their boats by the Italian coastguard, the navy, a Doctors Without Borders boat and two vessels operating under the EU's Operation Sophia, which patrols the sea for people smugglers.

The rescue followed a lull in arrivals caused by bad weather, during which only around 400 migrants were picked up in over 10 days – a startlingly low number compared to the summer months, when an average of 760 people a day were rescued.

According to the United Nations, the number of migrants crossing the Mediterranean to Europe fell by more than a third last month, due also to a Turkish crackdown on traffickers in the Aegean on the route into Greece.

The International Organization for Migration estimated in late November that nearly 860,000 migrants had landed in Europe so far this year, with more than 3,500 dying while crossing the Mediterranean in search of safety.

On Tuesday, the UN's children's agency warned that women and children make up an increasing proportion of the migrants and refugees on the move, and currently account for more than half, up from just 27 percent a few months ago.