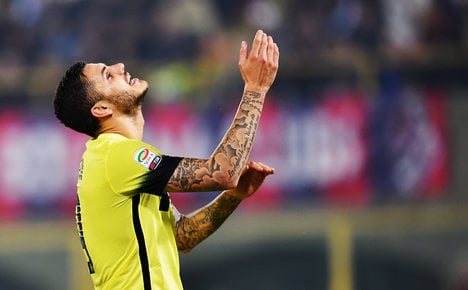 Inter star Mauro Icardi was robbed after posting a picture of his plush new watch on Twitter. Photo:Vincenzo Pito

Argentinian Icardi is Inter's top scorer with four goals this season but sat on the bench on Saturday as Roberto Mancini's men secured a 1-0 win over Genoa at the San Siro to go top of the table.

On his return home, Icardi was parking his car when he was approached by two men who demanded money.

When he refused, his luxury Hublot watch – seen pictured in a Twitter post while Icardi is driving to training in his Rolls Royce – was taken by the thieves before they made their escape on a motorbike, according to
fcinternews.it.

Icardi was left unharmed and a complaint has been made to police in Milan.

Inter will finish the weekend top of Serie A with a two-point lead on Napoli after Maurizio Sarri's men were stunned 3-2 away to Bologna.