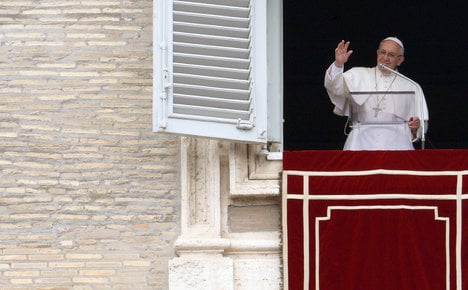 The 2016 Catholic Jubilee of Mercy is set to get underway on Tuesday. Photo: Filippo Monteforte/AFP

In the latest incarnation of a 700-year-old Catholic tradition, Tuesday will mark the beginning of a holy period of just under a year in which believers are encouraged to renew their relationship with God and seek forgiveness for their sins.

Francis set a new tone for this Jubilee with his surprise announcement in September that he would be granting every priest the discretion to absolve women for having had abortions.

Catholic Church dogma considers terminating a pregnancy a heinous sin, and it is normally punishable by excommunication.

Pro-choice groups are sceptical about whether many women – or doctors who carry out abortions for that matter — will avail themselves of the pope's offer to confess.

Instead, many Vatican watchers saw the move as another example of Francis signalling his desire to change the Church's approach from condemnation of wrongdoing to an understanding of the difficulties faced by 21st-century believers.

“The greater the sin, the greater the love the Church must express,” the Argentinian pontiff said when he announced the extraordinary Jubilee in March on the second anniversary of his election.

At the time, many interpreted Francis' move as highly political, coming as it did just four months after his plans for reform of attitudes to divorce and homosexuality had run into fierce opposition from traditionalist bishops at a synod on the family.

The jubilee runs until November 20th, 2016. As has been the case for seven centuries, pilgrims visiting Rome will be able to mark the occasion by entering St Peter's and other famous churches through special Holy Doors that are kept bricked up between Jubilees.

But the pilgrimage is no longer a required rite. In a Francis innovation, believers will have access to Holy Doors around the world – including in the Central African Republic capital Bangui, where the pope himself opened a door last month.

The pope on Sunday said he hoped the year would be a chance to repair divisions between Roman Catholics and Orthodox Christians dating to the 11th century.

Speaking on the 50-year anniversary of a joint declaration by then Pope Paul VI and Orthodox Patriarch Athenagoras expressing regret for many of the past actions that led up to the Great Schism between the Western and Eastern rites, he said he hoped for “new steps in mutual forgiveness”.

Jubilee years have their roots in an Old Testament tradition of freeing slaves and prisoners once every 50 years.

The concept died out in Judaism with the dispersal of Jews around the world but was relaunched in a Catholic format by Pope Boniface VIII in 1300 with pilgrimages to Rome at its heart.

They have been held variously at intervals of 25, 33 (Christ's age when he was crucified) and 50 years with occasional extraordinary ones slotted in between. The last Jubilee was in 2000 and was called by John Paul II to mark the millennium.

By attracting hundreds of thousands of pilgrims to Rome in search of indulgences they were often willing to pay for, Jubilee years became huge money-spinners for the early modern Church, contributing to the theological turmoil that led to the establishment of rival Protestant churches in much of northern Europe.

Today, Rome's hotel-keepers and taxi drivers are hoping for a boon, with even some modest boarding houses run by religious orders reported to have jacked up their room rates to cash in on the increased demand for bed space.

Nevertheless, Bernabo Bocca, the head of the hotel industry association Federalberghi told the Italian daily La Stampa that hotel occupancy was down 20 percent from this time last year.

For the cash-strapped city authorities, the Jubilee poses a major headache with additional convoys of pilgrim coaches adding to the strain on creaking infrastructure and overcrowded tourist areas raising safety concerns.

Italian security forces have been put on high alert due to fears of jihadist attacks like the Paris carnage of November 13th.

A no-fly zone applying to drones as well as regular aircraft has been declared above the capital and provisions made to shoot down anything that breaches it.

Despite the extraordinary and unprecedented measures, officials stress that they have no knowledge of a specific or credible plot to attack Rome or the Vatican.