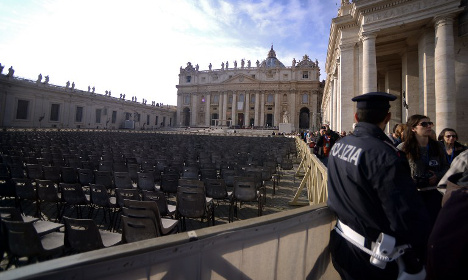 Police patrol St Peter's Square on the eve of the Jubilee on Monday. Photo: Filippo Monteforte/AFP

Pope Francis on Tuesday launched an extraordinary Catholic Jubilee year by opening a “Holy Door” in the walls of St Peter's, embracing a 700-year-old tradition while urging the Church to reach out and embrace the modern world with mercy.

“This is the door of the Lord. Open to me the gates of justice,” the Argentinian pontiff said before being helped up three marble steps to push the giant bronze doors open. In a break with tradition that reflected Francis's modernizing instincts, the order to open the doors was delivered in Italian rather than Latin.

The 78-year-old then paused on the threshold of the renaissance basilica for two minutes of silent prayer before walking inside in an act to be carried out by hundreds of thousands of pilgrims in the coming months. Francis was followed through the door by his predecessor, the now-retired Benedict XVI, 88, and by hundreds of cardinals, bishops and male and female members of religious orders.

Clutching a walking stick in his right-hand and looking extremely pale, Benedict was helped into the basilica on the arm of his assistant Georg Ganswein.

Amid heightened security following recent terror attacks around the world, the Vatican said 70,000 pilgrims had packed into St Peter's square and surrounding streets to watch Francis open the usually bricked-up wall in the facade of the renaissance basilica..

Amid heightened security following recent terror attacks around the world, an estimated 50,000 pilgrims packed into St Peter's square and surrounding streets to watch Francis open the usually bricked-up wall in the facade of the renaissance basilica.

Many had tears rolling down their cheeks or eyes clenched shut in prayer as Francis ordered the door open for the first time since the last Jubilee, in 2000. The first pilgrims had been in the square since before dawn in search of a prime spot to watch the latest enactment of a ceremony laden with religious symbolism.

Among them was Cecilia Koo from South Korea. “This pope says he is here to serve. He is one of my favourites,” she said.

Polish friends Teresa and Carolina were returning to Rome after coming for John Paul II's Jubilee 15 years ago. “What will I change to mark the Jubilee? I think I'll give some change to a homeless beggar that I usually ignore,” confided Teresa.

“To pass through the Holy Door means to rediscover the infinite mercy of the Father who welcomes everyone and goes out personally to encounter each of them,” Francis said in a homily during the preceding mass.

Francis also underlined the significance of his decision to start the Jubilee on the 50th anniversary of the end of the second Vatican Council, a gathering of bishops credited with a modernization of the Church that Francis is attempting to emulate. Francis said the 1960s council had allowed the Church to emerge from self-enclosure.

“It was the resumption of a journey of encountering people where they live: in their cities and homes, in their workplaces,” he said. “Wherever there are people, the Church is called to reach out to them and to bring the joy of the gospel.”

For Francis's predecessor, the German-born Joseph Ratzinger, Tuesday's ceremony represented a rare public outing. The Emeritus Pope, as he is officially known, has lived in seclusion within the Vatican since retiring in 2013 as failing health left him incapable of running an institution beset by the clerical sex abuse scandal and internecine bickering in its upper echelons.

Tuesday's celebrations will conclude in the evening when images by some of the world's greatest environmental photographers will be projected onto the facade of Saint Peter's in an initiative linked to the ongoing global climate conference in Paris.

“How much wrong we do to God and his grace when we speak of sins being punished by his judgment before we speak of their being forgiven by his mercy,”  he said on Tuesday. “We have to put mercy before judgment … Let us set aside all fear and dread, for these do not befit men and women who are loved.”

In a surprise move reflecting that aim, Francis announced in September that for the duration of the Jubilee, priests would be given special dispensation to absolve women who have had abortions.

In addition, some 800 priests around the world are to be designated “missionaries of mercy” tasked with encouraging higher levels of confession amongst believers. Those involved have been selected for their ability to preach well, understand human frailty and ensure the confessional is not experienced “like a torture chamber” as the pope has put it.

Francis's push for a less judgmental, more understanding Church has encountered fierce resistance from traditionalists opposed to any relaxation of teaching on hot-button subjects such as homosexuality, divorce and unmarried cohabitation.

Traditionally, Catholics were expected to make a pilgrimage to Rome to benefit from the indulgences on offer to the faithful who pass through the Holy Doors during Jubilee years.

Francis has effectively done away with this 700-year-old custom by ordering cathedrals around the world to open their own Holy Doors. That will happen on Sunday, when Francis himself opens the door at one of Rome's major churches, St John Lateran.

With millions of pilgrims packing the already-crowded streets of Rome, concerns over the consequences of potential attacks are running high with unprecedented security measures in place for the duration of the Jubilee.

“There has been no specific threat but the context is troubling,” said Rome Prefect Franco Gabrielli, the official in charge of ensuring the Jubilee passes off smoothly and safely.