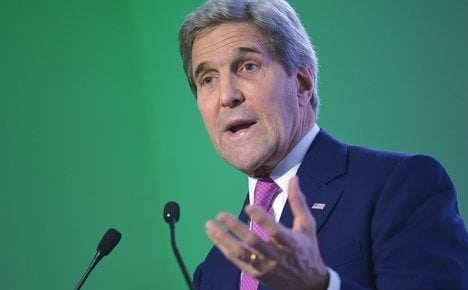 John Kerry will chair talks on Libya in Rome on Sunday. Photo:Mandel Ngan/AFP

The meeting “will demonstrate the commitment of the international community to helping Libyans move forward rapidly to form a unified Libya government, a government of national accord,” he said.

Italy, a former colonial power in Libya, called the conference along with the United States, which will also include representatives from Russia, Britain, China and France.

Gentiloni said last week that the one-day meeting aims to give “a decisive push for the conclusion of a deal for a national government in Libya”, where the Islamic State group is exploiting the chaos and taking root.

Earlier Thursday, Libya's rival parties met in Tunis for talks on a disputed UN-brokered deal backed by the international community to set up a unity government.

Ambassadors to Libya from several EU countries and the US on Tuesday warned against attempts to derail the UN-brokered deal, insisting it is the only way forward.

Libya has had two administrations since August 2014, when an Islamist-backed militia alliance overran Tripoli, forcing the recognized government to take refuge in the east.

Kerry is in Paris for the UN conference on climate change.